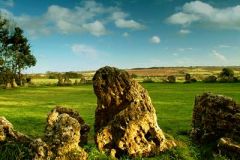 Here's an idea that might be of interest to younger readers - or to parents who would like to get their children interested in Britain's remarkably rich history and archaeological heritage. Its the Young Archaeologists Club (YAC), and it does just what it says on the tin. The Young Archaeologists Club connects young people aged 8-16 years old who are interested in archaeology, through over 70 local branches across the UK.

The Club began way back in 1972 as Young Rescue. The club grew until the operation was taken over by the York Archaeological Trust, and eventually, by the Council for British Archaeology (CBA). Along the way, it acquired a new name, and over 3000 members.

Tony Robinson, of Time Team fame, is the Honorary President of YAC, and he and other Time Team stars give regular talks to YAC chapters around Britain, sharing their enthusiasm for history and archaeology, and doing what they can to get young people interested and active in exploring the archaeology of their own area.

Aside from the usual sorts of things you'd expect in a club like this (membership card, certificate, quarterly magazine) there are a number of 'extras' that really make the YAC worth special consideration. Members get a YAC Pass, allowing free entry to properties owned by Cadw, English Heritage, Historic Scotland, and the Northern Ireland Environment Agency, and free or discounted to major (and minor) museums.

There are special YAC residential holidays focussed around archaeology and an annual Young Archaeologist of the Year competition. The most recent edition of the YAC magazine included features on Vikings, India, making bread, and human remains. There are puzzles, competitions, and interaction with fellow young members.

Membership is open to children 8-16, but also to 'interested adults', and there are discounts for several children in the same family, as well as family and school memberships.

The Ilchester Arms Hotel is a charming 16th Century coaching inn that has been tastefully decorated to be stylish and comfortable without loosing the character of its heritage. The rooms are all unique with their …