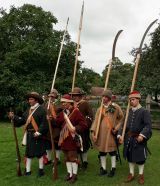 Farleigh Hungerford Castle in Somerset will be hosting a Father's Day event that looks interesting. How much do you know about the Pitchfork Rebellion? If you're like most people, the answer is 'not much'. Yet, the rebellion was one of the most audacious and infamous attempts to overthrow the monarchy in British history. Visitors to the Rebellion 1685! weekend at Farleigh Hungerford Castle on Saturday 19 and Sunday 20 June will find out just why this legendary event has gone down in history books for its daring and sheer audacity.

Rebellion 1685!
English Heritage, who run the castle, have planned an intriguing historical re-enactment for the Father's Day weekend. EH spokesperson Naomi Matthews says: “Dads are notoriously difficult to buy for, so this Father’s Day, why not appeal to your Dad’s inner rebel and treat him to a day out with a difference at Farleigh Hungerford’s Rebellion 1685 event?

"Whether he’s a history buff or novice, a rebel with or without a cause, or if you’re simply looking for a great way to keep the whole family entertained, there will be plenty going on at Farleigh Hungerford this weekend. As well as enjoying the thrill of battle re-enactments, visitors will gain a greater insight into the history behind the ‘Pitchfork Rebellion’ – an event which has immense significance for our local area.”

In 1685, the Duke of Monmouth’s army, comprising around 6,000 men, marched through the West Country, taking part in a number of skirmishes along the way, including the Battle of Norton St Philip, just a few miles from Farleigh Hungerford. With a living history encampment, gun firing and weaponry displays, visitors to Farleigh Hungerford Castle will get to experience what it would have been like to take part in the last pitched battle on English soil. And they will be able to answer the burning question, where exactly do pitchforks fit in?

There will be a number of performances of skill and weaponry throughout the day, from the two opposing sides of the battlefield. King James’s soldiers, armed with muskets and pikes, will be fighting it out with the Duke of Monmouth’s army – an enthusiastic gang of rebels brandishing scythe blades. Visitors can even try their hand at pike drill, marching and wielding broom handles under the command of the Captain of the Taunton Garrison.

About Farleigh Hungerford Castle
The remains of Farleigh Hungerford Castle stand in a lovely valley of the River Frome, on the border between Wiltshire and Somerset just nine miles from Bath. The fortified mansion was begun in the 1370s, and was occupied by the remarkable Hungerford family for over 300 years. Today their intriguing, and sometimes gruesome stories are told through graphic interpretation panels, a free audio tour, as well as the many hidden treasures throughout the property, from the chapel’s rare medieval wall paintings to the best collection of human-shaped lead coffins in Britain.

I have had the pleasure of visiting the castle on several occasions, and it is a fascinating historic site, well worth a visit even when there aren't any historic re-enactments going on! 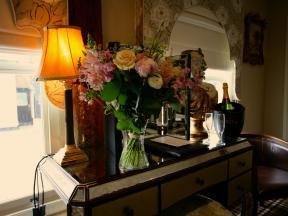 15th Century inn offers charming and well-appointed accommodation award winning restaurant and Essex Barn wedding venue. The rooms are located in a separate block away from the main building offering a quiet and secluded area …