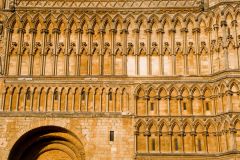 I just became aware of a fascinating website called Heritage Connect Lincoln. This ambitious project, supported by English Heritage, the City of Lincoln Council, the Heritage Lottery Fund, and Townscape Heritage, maps the historic city of Lincoln into 'Character Areas'. Website users can explore each Character Area in fantastic detail through a mix of maps, photos, historic reconstructions, that detail the historic development of the area, the character, condition of buildings, and how the area relates to the city as a whole.

All that might sound a bit dry unless you're a civic historian, but it isn't! The depth of historic detail is fantastic, and it makes for fabulous reading - and viewing. The website ties together information provided by The Lincoln Heritage Database, The Lincoln Archaeological Research Assessment, The Lincoln Townscape Assessment, and the Lincoln Ecological Survey to create a quite wonderful historic resource.

The site is built around 108 Character Areas defined in the Lincoln Townscape Assessment (LTA). According to the website, "The LTA is an audit of the existing character of all parts of the Lincoln Authority Area. Through integrating principles of archaeology, urbanism and ecology the LTA has produced a holistic and substantive assessment of the current tangible/visible character of Lincoln.

"Each ‘Character Area’ is described according to its historical development and its urban form, with emphasis placed on how the traces of previous activity, be it recent or ancient, are manifested in the current character of an area." This really is a terrific resource, and it would be fantastic if the concept were taken up by other major historic cities and towns (for example, London, York, Chester, Winchester .....)