Launde Abbey lies in 450 acres of parkland on the border of Rutland and Leicestershire. At the core of the site is a 12th-century chapel, the only surviving bit of an early medieval priory on the site. What we can see today is only a small part of the original chapel, which was over 3 times as wide and much longer. Unfortunately, the rest of the chapel was destroyed by Cromwell - not by Oliver Cromwell and his Puritan cohorts, as you might expect - but by Gregory Cromwell and his son, Henry, during the 1540s and 1550s.

There is a large monument to the elder Cromwell near the altar, which is said to be among the very best examples of early English Renaissance sculpture in England. There is also some richly decorated original medieval stained glass.

Though the priory is long gone, Launde abbey has for many years served as a conference centre and retreat for the dioceses of Peterborough and Leicester.

Unfortunately, this fine historic site is threatened with destruction, and is faced with a huge bill for essential repairs, or it will be lost forever to the nation. A campaign has been launched to raise the funds necessary to save Launde abbey and to spread the word about this historic site.

As of July 2010 over £978,000 has been raised, a quite wonderful response to appeals from voices as diverse as the Archbishop of Canterbury and pop superstar Sir Cliff Richards. Still more is needed, though, so if you would like to contribute, or simply to learn more about Launde Abbey, visit the official website at https://www.laundeabbey.org.uk/. 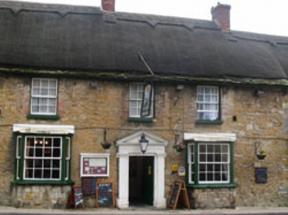 The George Hotel is a 15th century country hotel based in the town of Castle Cary. The hotel itself is situated on Market Place which is the centre of the high street. It is nestled …