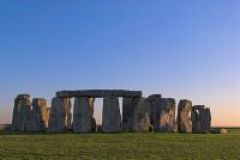 Here's a nifty bit of news; archaeologists from the University of Birmingham have discovered evidence of a previously unknown henge monument less than 1 kilometre away from the World Heritage site of Stonehenge. The archaeologists, including members from the Ludwig Boltzmann Institute for Archaeological Prospection and Virtual Archaeology in Austria, and the Universities of St Andrews and Bradford, are calling the discovery a 'major ceremonial monument'.

I'm not sure even the most optimistic archaeologist would have expected such an exciting discovery so early into the study. The new henge monument is contemporary with the famous stone circle (i.e. late Neolithic) and appears to be on the same orientation. The henge is made of a ditch with entrances at the northeast and southwest. There are pits within the circle, up to 1 metre in diameter. The presence of the pits suggests a large timber structure supported on posts.

The Angel restaurant at Long Crendon. This 16th century coaching inn nestled in a picturesque village on the Bucks, Oxfordshire borders has built up a reputation for being one of those rare places that combines …