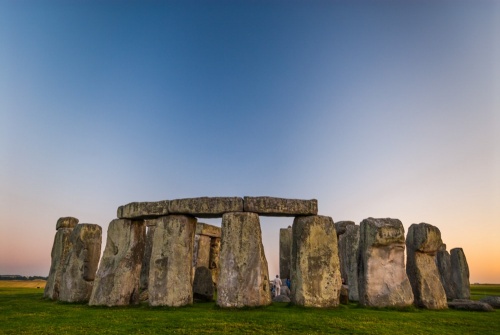 There was a henge at the Stonehenge site before the Bronze Age, built sometime around 2800 B.C. It was really nothing more than a ditch and bank enclosing an open space. The stone now called the Heel Stone lay outside the ditch.

There may at some point have been a circle of wood or a hut inside the enclosure; there certainly was a tradition of wooden henges in the area. Inside the henge, a ring of 56 holes was dug, called today the "Aubrey Holes" after John Aubrey, a 17th-century "discoverer" of the site. These holes were filled with cremation materials.

About 2200 B.C. the Beaker People swung into action. Perhaps to impress their superiority on the local population, they began the process of building a double ring of stones inside the henge. These "bluestones" were transported all the way from southern Wales, a distance of several hundred miles. Why go to Wales when there were stones as close as twenty miles to the north on the Marlborough Downs? 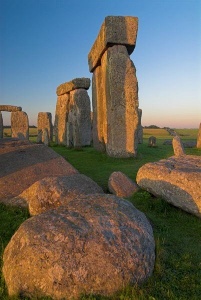 Well for one thing, it seems that the Beaker People had an established trade route from Wessex to Ireland in their search for copper and gold, so southern Wales was on their way home. Also, it is possible that there may have been friction between the Beaker People and the natives of the Marlborough Downs which prevented them from accessing the nearer stones.

Transporting the stones was an enormously impressive achievement. Over 80 of these bluestones, most weighing over four tons, were painstakingly carried to Salisbury Plain by boat and sledge, a process that took over a hundred years to complete. This was not a weekend project by a team of do-it-yourselfers.

In later years the transport of these stones was attributed to magic, even the wizard Merlin was supposed to have taken part.

Impressive it may have been, but the stones were barely in position before they were torn down. They may even have been hauled off to another building site.

Speculation (there's that word again) among archaeologists is that there was a shift in the power balance of the area, and the Beaker People were ousted by a local revolt. A new circle was erected, this time using more easily obtainable "sarsen" stones from the Marlborough Downs, to form an inner horseshoe surrounded by a circle.

The interesting thing to note is that the linteled horseshoe was built using mortise and tenon joints, pegs and holes, as would be expected of people skilled in woodworking. This is the circle that is so famous today. It is really the third phase of building, incorporating the other two, for the "bluestones" were brought back from exile and re-erected around the inner horseshoe. 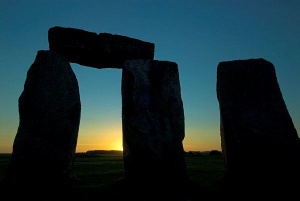 Is it an astronomical observatory? Probably not, though there are certainly solar and lunar alignments to be found in the final arrangement of stones. Was it a Druid temple, complete with sacrifices and blood-curdling ceremonies? Sorry, no. The Druids were Celtic priests, not due for another 1500 years at least. What on earth was it then?

It was probably a multipurpose ceremonial centre, like other early circles, relating to fertility, death, and rebirth. There are remains of quite a few cremations and other burials nearby and inside the circle. It was obviously an important site in the religious observances of the Bronze Age culture, but precisely what those observances were it isn't possible for us to say. In other words, we don't know, but half the fun of Stonehenge is the speculation.

Stonehenge is located off the A360 at Airman's corner about 2 miles west of Amesbury.

As you can well imagine, Stonehenge is incredibly busy. The site is now using a timed ticket system to regulate the flow of visitors, and advance booking is recommended. The best times to visit are outside the main summer tourist periods, early in the morning, and later in the day (last entry two hours before closing time).

For a special treat, join a small group and book a visit outside normal opening hours, when your group will have access to the circle itself and wander amongst the stones. Details of opening times can be found on the English Heritage website.

See our Stonehenge Photo Gallery for photos showing the normal views outside the circle plus a special look inside the stone circle.

Related:
Stonehenge Landscape
Woodhenge - a nearby site that may be linked to Stonehenge

MORE Prehistoric Britain:
Back: The Bronze Age
Next: Celtic Britain