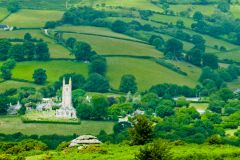 One of the things that makes Britain so ... British are the odd, outlandish, and downright strange folk traditions that have survived over the centuries. Though many of these traditions have changed so much over time that is hard to imagine what they might have originally been like, enough history clings to them to charm and intrigue today's visitor. The good folks at VisitDevon, the official Devon tourism website, have compiled a list of peculiar or quirky traditions from across the county. What follows is my own summary of their list, which should offer something intriguing no matter what your tastes!

Blackawton Worm Charming Festival, Blackawton, May
You've heard of Indian snake charmers? Well, that's nothing; in Devon they take it one step further and charm worms. At Blackawton an annual festival is held in early May to indulge in this rather unusual pastime. 'Worm Charmers' have to 'charm' or find as many worms as possible, in a given area of ground within a time limit.

A liquid solution (often beer) may be used to help the ‘charming’ process along. The area to be charmed can be up to 3x4 feet, and the 'charming team' consists of a Catcher, a Charmer and a Counter. Contestants have 15 minutes to catch as many worms as possible. The British Association of Worm Length Supporters (which revels in the acronym BAWLS) insist that all worms must be returned to the soil after the contest, preferably in the same hole from which they were charmed.

Pot Walloping Festival, Westward Ho! - May
The origins of the Pot Walloping Festival date back to the 19th century, when local people would throw back pebbles from the beach that had fallen from the ridge during winter storms. The throwing of pebbles still takes place, but the festival has now become a 3-day village festival, with local crafts, fair stalls and live entertainment. There are regular processions of vehicles from regional car and motorcycle clubs, arts and crafts for sale, a Teddy Bears Picnic for the younger generation, a 6-a-side football tournament, and an inter-pub challenge.

UPDATE
It appears that the festival is no longer being held.

Hunting of the Earl of Rone, Combe Martin – May
An annual event involves a search for, and killing of, an imaginary person known as the Earl of Rone. The origins of this peculiar activity are unknown but one story says that the real Earl of Rone was a 16th-century Irish lord, who was forced to flee his homeland and became shipwrecked on the beach at Combe Martin and took refuge in the forest nearby. The Earl became a local hero and the festival celebrates his escape from his enemies. The tradition is mixed up with earlier pagan rites associated with the Spring Beltane.

The Hunting of the Earl of Rone begins on a Friday with a parade of Grenadiers, then the children of Combe Martin re-enact the Hunting of the Earl by searching through the forest. On Saturday the adults take a turn searching the forest in search of the Earl. On Monday, the masked Earl appears in a Donkey Parade. He is placed on a hobby horse, then dramatically shot off before he is revived by onlookers! An effigy of the Earl is then carried to the beach at sunset and thrown into the sea! The event often draws thousands of participants.

Pixie Day, Ottery St Mary – June
A day on which the Pixies can take their revenge on the citizens of Ottery. Pixie Day is an old folk tradition that takes place annually on a Saturday in June. The day commemorates the local legend which tells that the pixies of Ottery were banished to the local caves known as 'Pixie's Parlour'.

The celebrations start with a fete in the afternoon and at 6pm the event moves to the town square where hundreds of 'Pixies' (local Cubs, Scouts, Brownies and Girl Guides dressed in pixie garb) capture the St. Mary's church bell ringers and drag them from the church into the square, where a reenactment of the pixies banishment takes place.  The event culminates in a huge fireworks display.

Marldon Apple Pie Fair - Last Saturday in July
A traditional village fete with donkey cart pulling a big apple pie around the village. An Apple Pie princess is crowned and there is a family dog show. The event began in 1888 and commemorates Mr George Hill, who drove a cart carrying a huge apple pie, pulled by two donkeys, to the St Mary Church Fair. A large apple pie is baked and carried to Jubilee meadow on a donkey cart. Marldon is just outside Paignton, and for more information on the area, the best source is www.englishriviera.co.uk.

Widecombe Fair, Widecombe-in-the-Moor - September
The annual Widdicombe Fair was made famous in a popular verse about 'Uncle Tom Cobley and All'. Widecombe is a picturesque village which nestles in a bowl of hills on the eastern edge of Dartmoor National Park. The fair offers many traditional events such as horsemanship, dog events, show jumping, and vintage tractors. There are also traditional craft events such as dry stone walling and thatching, and the event is topped off with the Tom Cobley Novelty Race.

Tavistock’s Goose Fair, Tavistock - October
Tavistock's annual fair dates to the 12th Century, when farmers came here to sell their geese, driving them through the streets to the Market. The fair brings together market traders and showmen from around Britain, with crafts, food stalls and side-shows.

Flaming Tar Barrels, Ottery St Mary – 5th November
Another Ottery St Mary event that has survived, this old custom probably dates to the 17th century and takes place every year on 5th November. Seventeen barrels are well-seasoned with tar, then set alight one at a time outside pubs in the town. The flaming barrels are then carried on the shoulders of townsfolk.

The event starts with smaller barrels carried by children, then larger women's barrels, then still larger men's barrels. The final barrels, lit at midnight, can weigh 30 kg each. The event culminates in a huge bonfire on the banks of the River Otter. An annual fun fair runs in conjunction with the Flaming Tar Barrels.

The Sun Hotel is set directly opposite the shadow of the dramatic ruins of the 12th Century castle resting within the winding loop of the River Coquet. The hotel portrays all the charm of a … more >>