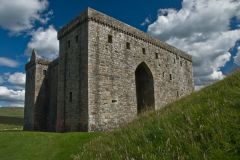 Well, we've come to the final award in this years British Heritage Awards (though I have a few not-quite kudos to hand out before the end of the year - stay tuned!). We've covered large and small historic attractions, historic towns and cities, best heritage websites, and heritage organisation of the year.

Now its time to recognise the best promotion of heritage throughout the year. Since this is the first time we've given this award, we'll not be too pedantic about restricting ourselves to the calendar year 2010, but rather, look to recognise efforts to promote heritage on an ongoing basis, whether that effort falls completely within the year 2010 or not.

I've considered a large range of activities, including local history initiatives and national awareness campaigns, and come up with a shortlist that deserves credit for helping to make people aware of heritage issues. This is not intended to be an award solely recognising appeals for donations for worthy heritage preservation, though a quick glance at the shortlist might lead you to think that is the only criteria.

It is a sad truth that much of the visible promotion surrounding British heritage is in the nature of public appeals for funds to save, preserve, or restore threatened houses, landscapes, or other historic treasures. It would be delightful to see more visible promotion of awareness in the rich historic treasures that this nation possesses, and to encourage both British and visitors to these shores to appreciate that heritage.

So with all that out of the way, its time to get onto the shortlisted candidates ...

I've undoubtedly missed out on small or regional heritage promotions. If you know of any heritage appeals or initiatives aimed at preserving, maintaining, restoring or increasing public awareness of heritage and history around Britain, then let me know and I'll do my best to spread the word.

And the winner of British Heritage Awards - Best Heritage Promotion 2010 is ...

BBC Norman Season
If you were anywhere near a television this summer you were bound to run into one of the history programmes billed by the BBC as part of 'Norman Season', on BBC Two, BBC Four and BBC Learning, programmes aimed at making people aware of Norman history and the profound effect the Normans had on British history.

The shows were heavily advertised and though I'm not privy to viewer numbers I suspect that the advertising paid off in greatly increased awareness of our history. The shows that were part of the Norman season included Dan Snow's Norman Walks, Domesday Book, the Making of King Arthur, The Normans, and The Treasures of the Anglo-Saxons.

Norman Season is part of an even bigger initiative dubbed Hands-On History, an effort that will last 2 years and attempt to make people to aware of the history around them. Shows that form part of Hands-On History include Turn Back Time, and Snowdonia 1890.

Do programmes such as these actually 'work'? Well, from anecdotal evidence, the answer is a resounding 'yes'.

Our daughter, age 10, has shown only minimal interest in history before now, yet she has been avidly watching every episode of Snowdonia 1890 and Turn Back Time with the fascination she normally reserves for Scooby-Doo. If awareness and interest are the benchmarks of a good heritage promotion campaign, then BBC's history efforts over the past year deserve all the plaudits we can give them. More, please.

The slogan used was 'Could you help us stop the destruction – by restoring just one step of footpath?'. That makes a more immediate impact and makes each contributor realise that their own contribution can have a concrete positive effect. It made me think that with a contribution I would be adopting one metre of footpath as my own.

Save Britain's Heritage
Consider this a 'lifetime' award rather than specifically a 2010 recognition. Save British Heritage is engaged in an ongoing public awareness campaign to make the public aware of historic buildings at risk, and raise money to preserve these national treasures.

And, though it is not specifically a heritage promotion, I'd like to record my appreciation for the work of Geograph, a public online project to create photographs of every grid square in Britain. Geograph has created an astonishing 'snapshot' of Britain at this point in time, a snapshot which naturally includes a vast number of photos of historic places (and a lot of traffic intersections as well, but who's complaining!)