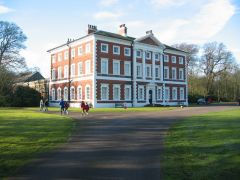 Lytham Hall is a Grade I listed Georgian house in Lytham St Annes, Lancashire. The house is built on the site of a 12th-century Benedictine priory, and there was a Stuart manor house on the site before the current elegant building was erected in the mid-18th century by John Carr of York. The Hall has been open to the public on a limited basis for many years now, but the chance to make it fully accessible to the public is now under threat.

The North West Heritage Trust, a charitable organisation that looks after Lytham Hall and several other historic houses in the region, was awarded a grant by the Heritage Lottery Fund to restore the hall, make the house and grounds more accessible to the public, create a John Carr study centre, and preserve and maintain the archaeology and architecture of the site.

All well and good, BUT, in order to actually receive the grant, the NWHT must raise £3 million in matching funds by March 2011. The deadline is fast approaching and as of this writing, only £1 million has been raised. If the trust cannot raise the remainder, the Lottery fund grant may be withdrawn.

Note: photo of Lytham Hall is © Keith Burroughs and is reproduced here under the Creative Commons license

The Ilchester Arms Hotel is a charming 16th Century coaching inn that has been tastefully decorated to be stylish and comfortable without loosing the character of its heritage. The rooms are all unique with their … more >>