Home > Heritage Traveller > What is a crannog?

What is a crannog? 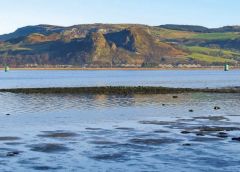 If you've ever seen the word 'crannog' on an OS map, you might have wondered what it signified. I've watched enough Time Team episodes to have a very hazy idea that a crannog was some sort of inhabited man-made island, usually joined to the mainland by a causeway. But that's where my knowledge ended. Until today.

I just ran across a neat little article on the history of crannogs in Scotland, with a focus on the Inner Hebrides. The website is, appropriately enough, Crannogs.com, and its the work of Mark Holley, an American researcher with a PhD in Underwater Archaeology from Edinburgh University.

Here are some of the key points of Holley's history of crannogs article:

Crannogs have been used for habitation longer than any other form of Scottish dwelling, from the Neolithic period (4000-2000 BCE). So until you excavate a crannog it is impossible to tell whether it is incredibly ancient, or a few hundred years old. But excavations can reveal a lot, partly due to the fact that the cold water of Scottish lochs is such a good storage environment.

Organic matter such as seeds, wood, and plant fibre can be remarkably well preserved. But that's nothing; a recent 'dig' on a crannog site turned up a butter dish with butter still in it!

As I was about to post this article I ran across another brief explanation entitled 'What is a crannog', by the Scottish Crannog Centre (see Resources below)

I'll keep a close eye out for partly used butter dishes next time I see a crannog marked on my OS map!

Image of Westferry crannog is © Thomas Nugent, used by permission under the Creative Commons license.