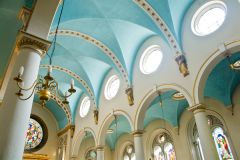 Last year I got to spend a week in London. Now that may not sound like much to those who regularly commute about the city, but for a Cotswold lad like me it was big stuff, I assure you. And being the inveterate photo-snapper that I am, I came back from my week of exploring the city with a few thousand photos. Well, they won't do any good just sitting in my camera, so it is with no small measure of pride that I unveil the London Photo Gallery, an illustrated guide to historic places to visit in the central London area.

There are plenty of London photos online, but I'd like to think that the London Photo Gallery is a bit unique, in that I set out to explore not only the famous sites like Westminster Abbey, Buckingham Palace, and St Paul's Cathedral, but also obscure places like the Zeppelin Building on Farringdon Road, and the site of the 19th century Texas Legation to Britain. You'll find old London pubs, historic churches, homes of famous Londoners, and even some places that I'll wager some Londoners don't know exist!

Harry Potter fans will enjoy the photo of Platform 9 3/4 at Kings Cross station, while royal enthusiasts will find palaces, monuments, and stately homes associated with past and present members of the royal family.

The fact that I walked so much definitely saved me some travel cost, but probably the best thing I did to save money was to stay at the Travelodge in Barking. It was close to a main tube line into the city centre, yet far enough out that the cost was half of what I would have paid had I opted for a city centre hotel. (I have no affiliation with the Travelodge, I only mention it as a money-saving tip).

I had great fun taking the photos for the gallery; I spent a week walking around the city from end to end, wearing holes in my shoes. It was a great way to keep fit, I can tell you, but more importantly, by walking everywhere, I got to see so much more of the city than I would have done if I'd gone everywhere by underground or by tour bus.

Really, the only way to truly get a feel for the city and enjoy all the obscure historic corners, is to put on a comfortable pair of shoes and stroll about. So, enjoy the photos, and I hope they inspire you to get out and explore London yourself. I had a terrific time, and I'm sure you will too.

A high quality delightful village guest house just 1.5 miles from Stansted Airport with award winning restaurant. The charm began in the year 1625 and we take great pleasure in ensuring that the charm continues … more >>