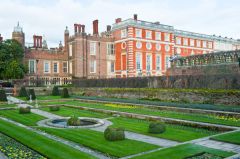 If you have the slightest interest in British stately homes you will be familiar with the name of Lancelot 'Capability' Brown. The foremost exponent of British landscape gardening, Brown had perhaps more influence on the way historic houses and grounds look than anyone in history. In recognition of the profound influence exercised by Capability Brown, English Heritage have announced that a blue plaque in his name has been erected at Wilderness House, Hampton Court Palace.

Brown lived at Wilderness House from 1764, when he was appointed Chief Gardener by George II, until his death in 1783. The house itself dates to 1700 and was the residence of all Chief Gardeners until 1881.

The Great Vine
During Brown's tenure at Hampton Court, his most important contribution was the planting of a Black Hamburg vine in 1768. That vine still survives as The Great Vine, the oldest and largest grapevine in existence.

A Brown thumb
If his work at Hampton Court Palace was all that Brown accomplished during his career he might still be remembered today, but it was the sheer scope of his work on the gardens and grounds of stately homes across Britain that made him such a memorable historic figure. Among the many, many examples of his work to survive more or less intact today are the gardens at Blenheim Palace, Chatsworth, Petworth House, and Alnwick Castle.

Editor's Soapbox
If you have never had the chance to view some of Capability Brown's landscape gardens, do please take the opportunity. His carefully crafted landscapes provide some of the most enduring and endearing vistas in Britain.

Set in the splendour of the Barle Valley, Simonsbath House stood alone for over 150 years before the small hamlet of Simonsbath developed in the 19th Century. This 350 year old house retains many of …