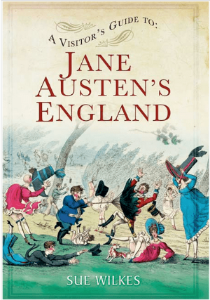 The perils of travel in Jane Austen's England were many, from bad roads to highwaymen, but perhaps the most peculiar peril of all occurred in October 1816 when a horse pulling the Exeter mail coach was attacked by an escaped lioness. The passengers travelling in the coach ran into a nearby inn while the coachman and guard tried to hold onto the horses and fight off the lioness. Thankfully the lioness's keeper appeared and recaptured the big cat before she could kill the horses.

That's just one of the wonderful historic vignettes in Sue Wilkes' beautifully written 'A Visitors Guide to Jane Austen's England'.

Wilkes makes the world of Jane Austen come to life, and shows what it was like for the middle classes of England during the author's lifetime, from travel to fashion, shopping, leisure, and, of course, finding a mate. Was it indeed an acknowledged truth that any man of reasonable means must be in want of a wife? A gentleman certainly needed to be careful, for it was not socially acceptable to speak to, or even notice, a young lady who was not yet 'out' in society.

Men of means needed to be on guard against husband-hunting ladies, who will 'pursue you with great tenacity'. Many couples met by attending dinner parties, and if you had any social standing at all you could be inundated with invitations. The entertainment might not always be to your taste, however. As one eligible clergyman wrote in his diary, "Dined with Mr Lucas - Dreadfully dull Evening - his daughter and niece did nothing but giggle to one another; Mem: Not to go there again."

Wilkes draws on Austen's own works of fiction, but also on Austen's private life to show how people lived, loved, and died from her birth in 1775 to George IV's coronation in 1820.

Every aspect of daily life is covered, from smuggling to a recipe for orange wine similar to that which Jane and her beloved sister Cassandra made for their family.

One of the most enjoyable parts of the book covers fashionable life in spa towns like Bath, where the wealthy and those who aped them would go to take the waters, but also to see and be seen by their social circle. Wilkes looks in detail at fashionable dress for men and women, and characters like George 'Beau' Brummell who set the tone for high fashion. Brummell made cleanliness into gospel, and spent 5 hours every day washing, bathing, and dressing.

The description of women's high headdresses is fascinating; women were expected to use a combination of their own hair and fake curls to create a mountainous arrangement shaped and coloured to resemble powdered wool, and topped with a plume of feathers a yard high rising from a platform of red daisies.

The book is illustrated with some wonderfully engaging illustrations from period journals, plus engravings of Jane Austen, her childhood home in Steventon, and Chawton church in Hampshire where her mother and sister are buried.

The book ends with a useful biography of Jane Austen and a timeline of her life, historical events, and literary works.

A Visitors Guide to Jane Austen's England is a delight. I don't think I've ever read a book that paints such a vivid picture of daily life in late 18th and early 19th-century England. It makes a perfect companion for Austen's beloved novels; it's the sort of book you can refer to for research or simply dive into at random to immerse yourself in the England that Austen knew.

A Visitor's Guide to Jane Austen's England is published by Pen and Sword Books and is available from the publisher and from Amazon.com and Amazon.co.uk in both paperback and Kindle versions.

Dating from the 1600's this former coaching inn echoes that same function to this day as it continues to extend a warm welcome to visitors and locals alike. As a family run establishment the accent …