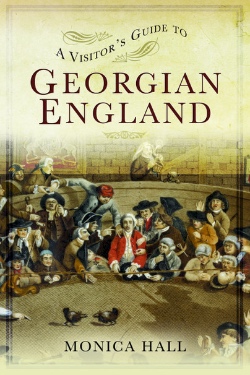 Imagine you could travel back in time to Georgian England. It sounds like the premise for a new TV series along the lines of Outlander, but it's the idea behind Monica Hall's intriguing book, 'A Visitor's Guide to Georgian England', from Pen and Sword Books.

This is history with a difference; rather than the sort of dull history book you might have been subjected to in school, Hall's delightful book makes the Georgian period come alive, as she describes what you, the time-travelling visitor, can expect to see, hear, even smell as you navigate your way through Georgian life, from fashion to entertainment, medicine to education, how to behave in polite society, and what you can expect if you venture into the shadows that lurk beyond polite society.

Hall sums up Georgians as optimistic risk-takers and encapsulates Georgian character with the modern admonition to 'Go for it!'.

And go for it they did, from ribald political satire to religious dissent; the world of Georgian England was tumultuous, sometimes bizarre, but surprisingly, quite often Georgians expressed an outlook not too different from our own.

Hall begins her time-travels with a look at Georgian clothes and ideals of beauty, including a step-by-step set of instructions for a woman getting dressed. It's a long, involved list, including multiple layers of petticoats and a tightly-laced set of stays to create a buxom figure. All those layers sometimes created issues when the need to answer the call of nature became too pressing to ignore. Some genteel ladies took a 'bourdaloue', a form of porcelain potty, to church with them so they could last through interminably long sermons. One wonders what became of the contents after the sermon ended.

That's just one of the fascinating insights into Georgian life that you will encounter as you travel virtually through 18th-century England.

Illegal Cosmetics
Did you know that wearing high-heeled shoes and cosmetics to attract a man could invalidate a marriage? According to an Act of Parliament in 1770, if a woman was shown to have used 'scents, paints, cosmetic washes, artificial teeth, false hair, Spanish wool, iron stays, hoops, high-heeled shoes, [or] bolstered hips' to ensnare a man into marriage, the offence was considered in the same light as witchcraft and the marriage would be deemed void.

Acts of Parliament aside there was a roaring trade in cosmetics. A 1784 cookbook contained recipes for cold cream, face beautifier, wig paste (for sticking your wig firmly to your head) and mascara made with a mixture of soap and lamp-black.

The book nicely balances a look at high society with the lives of ordinary Georgians, for example, the life of a highwayman - an occupation that paid quite a bit better than the drudgery of a labourer, at least until you were caught and executed by a poorly-skilled executioner for the entertainment of society.

Perhaps the lot of a labourer might be preferable after all, though woe betide you if you got sick and could not work. You might have to call upon a barber-surgeon, a jack-of-all-medical-trades who could put his hand to dentistry, minor surgery, and of course, blood-letting, the cure-all practice that was supposed to balance the body's 'humours'. It is no coincidence that barber-surgeon's symbol was a red and white striped pole, symbolising his bloody techniques.

If you thought that keeping fit is a modern idea, think again. Many Georgian men had their own workout routines to improve their physiques with the aid of weights and pulleys. It seems doubtful that they worked out as part of living a healthy lifestyle; rather the workout routines were an aid to vanity more than health-consciousness.

Runaway Marriages
I loved the author's look at Law and Order. Did you know that the Marriage Act of 1753 (otherwise known as 'An Act for Better Preventing of Clandestine Marriage' actually had the opposite effect to what it intended?

The Act was the first legislation in England and Wales to formalise the marriage ceremony and insist that a legal marriage had to be performed by an Anglican clergyman in accord with canon law and required parental consent, a license, and the publication of banns.

In practice, the law led to a spate of runaway marriages, with couples eloping and riding - one step ahead of irate parents - to the Scottish border, to places like the famous blacksmith forge at Gretna Green, where less strict Scottish laws applied.

I loved this book; I learned something new on every page and the author has done an outstanding job of making the colourful Georgian world come alive in all its contradictory, bawdy, and utterly fascinating glory.

A Visitor's Guide to Georgian England is available directly through the publisher and from Amazon.

The Ilchester Arms Hotel is a charming 16th Century coaching inn that has been tastefully decorated to be stylish and comfortable without loosing the character of its heritage. The rooms are all unique with their …