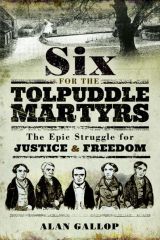 In 1834 a group of poor farm workers in the Dorset village of Tolpiddle gathered together to form the Friendly Society of Agricultural Labourers, with the aim of banding together to bargain for better wages from farm owners.

Tolpiddle (soon to be renamed Tolpuddle so the name didn't offend 19th-century sensibilities) was a rural backwater near Dorchester, an agricultural area dependent on large numbers of labourers, whose backbreaking labour was ill-paid at best and often bordered on starvation wages.

Forming a society like the Friendly Society of Agricultural Labourers was perfectly legal, which is why the consequences that followed are so astonishing. Six of the men who joined the Society were thrown in gaol in Dorchester, quickly tried under an arcane piece of legislation, and sentenced to be transported to the convict colonies in Australia.

The Story of the Tolpuddle Martyrs, as the six men became known, is a remarkable tale of bravery and stunning cruelty, of men who stood by their principles in the light of persecution that reached the very highest levels of British society. The Martyrs became heroes of the early trade union movement, and even today unionists make pilgrimages to Tolpuddle village to see the place that in many ways helped shape and define the struggle for workers' rights.

Gallop makes the Martyr's story come alive with original photographs, documents, newspaper illustrations, court records, and private journals. The level of research is extraordinary, but what makes this book so compelling is how the author tells the story, not just of the six Martyrs and their lives, but of the men who persecuted them and their motives.

The book begins with the arrest of the six labourers on 24 February 1834, then sets the scene for their eventual conviction with a look at the plight of farm workers and the background of social unrest that made authority figures so anxious to crush their efforts for change. The 1830s was a time of social upheaval, of rick-burning and mobs breaking farm machinery that threatened to replace their manual labour. It was the age of 'Captain Swing', a mythical character who incited farm workers to turn on their social betters and strike back at those who exploited their labour.

Against this background, the simple act of forming a Friendly Society was seen by authorities like James Frampton, the magistrate who heard their court case, as an act of rebellion, an act of sedition, and an act that had to be punished as harshly as possible.

The story of the Martyr's arrest and conviction is only the first section of this very readable account. The author traces the Martyr's passage on prison ships to Australia, and what happened to each man once they had reached the Antipodes.

The level of research is remarkable, and we hear word for word interviews with the convicts and letters exchanged between convict officials and the British government back home. The author has done an amazing job tracing each Martyr's experience under the incredibly harsh Australian penal system and showing how, at the same time, political efforts were underway back in Britain to get them pardoned and released.

Six for the Tolpuddle Martyrs is one of the best history books I have ever had the pleasure to read. The author has done a fantastic job of weaving the story of the Martyrs and their persecutors into a compelling narrative that reads like a novel. The book had me completely engrossed.

Six for the Tolpuddle Martyrs is available directly through the publisher and from Amazon.