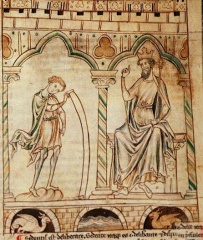 The second bishop of St. Asaph is a man worthy of some study. He was Geoffrey of Monmouth, who wrote one of the most influential - though not one of the most truthful - books of the Middle Ages. His Historia Regulum Britannaie (History of the Kings of Britain) would influence generations of scholars and writers.

The History was the supposed tale of Britain from its first habitation until the Norman invasion. Geoffrey's work was translated into Welsh on numerous occasions, where it was given the name "Brut y Brenhinned" (The Chronicle of the Kings).

To Geoffrey we owe the pleasant fiction that Britain was founded by Brutus, a fugitive from Troy (of Trojan Horse fame). Thus Britain was linked to Rome, which was supposedly founded by the Trojan, Aeneas.

Geoffrey also claimed that early Scotland, England, and Wales were divided between the three sons of Brutus, and that the eldest, Locrinus, had received England. This was later cited in support of English supremacy over the "Lesser" kingdoms of Scotland and Wales.

The History devoted considerable space to describing a golden age of Britain under the rule of King Arthur, and many of the familiar Arthurian tales first emerged from Geoffrey's fertile mind. This description of a golden age of early British rule explains the popularity of Geoffrey's work among the Welsh.

The History stirred the romantic imagination of readers all across Europe and did much to spread the fame of King Arthur. But Geoffrey was no Welsh nationalist. He was at pains to point out that the British had lost their lands because of sinfulness. He called for unity of all Britain under an English king.