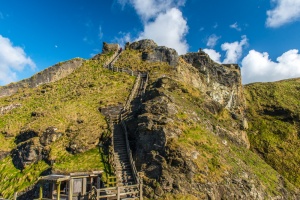 The time ... early 5th century
As the Roman hold on Britain got progressively weaker and the Roman Empire tottered on into a creaky old age, England was subject to a fresh influx of settlers from the area of modern Germany. These settlers, tribes of Angles, Saxons, Jutes, and Frisians, may have first come to England as mercenaries in the Roman army. In the wake of the Roman withdrawal British leaders, perhaps under a powerful overking, Vortigern, hired these mercenaries for protection. Mercenaries can be helpful as long as they are paid, but when the money ran out the Germans rose in rebellion.

The Anglo-Saxons
These Germanic tribes are the "Anglo-Saxons" to whom we owe much of our tradition, language, and physical heritage. They poured in upon the Romanized Celts of Britain much as the Normans would do to them in later times, pushing the inhabitants of the island back into the hills of Wales and Cornwall, creating pockets of Celtic culture and language.

At first, the British inhabitants fell back to the heights of the old Iron Age hill forts. There is evidence that many forts were reoccupied in the late 5th century. Gradually, however, even this struggle proved in vain, and the Germanic invaders settled throughout much of south, east, and northeast England.

The Roman warrior
It is during this push for settlement that the next and greatest British hero was born, the legendary King Arthur. Was King Arthur real? Not in the sense of the wonderful medieval romances popularized by Thomas Malory. There were no knights in shining armour searching for the Holy Grail in Arthur's company. In all likelihood, there was no Round Table or Sword in the Stone. What there was instead was a very brave warrior, who may not even have been named Arthur, leading the remnants of romanised British resistance against a steady onslaught of foreign pagan invaders.

Conflicting claims
In researching this material I found definitively that Arthur was Welsh, Celtic, or Breton. That he fought the Saxons in the north, in the south, or in Wales, around the year 450, or 500, or 525. That he was and wasn't a king, who was or wasn't named Arthur. That he was a figure of imagination and a real person.

The real Arthur (maybe)
It seems that there was a war leader, whose name we do not know, who defeated the Saxons, checking their advance temporarily. In later years people remembered this leader with longing; "Oh, if we only had ... to lead us now".

Eventually, the name Arthur adhered to this folk memory, and his list of accomplishments grew. Arthur is in many ways greater because we do not know the truth; it can't get in the way of peoples' need to create a saviour who is waiting to come to their aid when times get tough.

The real Arthur may have been a man named Ambrosius Aurelianus, or perhaps his war leader, who defeated the Saxons in a major battle we know as Mount Badon, (which may possibly be South Cadbury, in Somerset) halting their advance for as long as forty years.

In the end, however, the superior might and numbers of the Saxons and their allies were too much for the islanders, and Arthur's efforts became little more than a historical footnote. A terrifically romantic and exciting footnote though, for Arthur and his deeds were woven like a silk thread into the fabric of myth and legend in which Celtic storytellers delight.