A quick definition to start us off - the Mendips include, but are not limited to, the high limestone ridge of the Mendip Hills in northeast Somerset. Aside from those cave-riddled hills, the region extends to include the marshy lowland of the Somerset Levels and the nearby towns and villages of Glastonbury, Wells, and Frome. 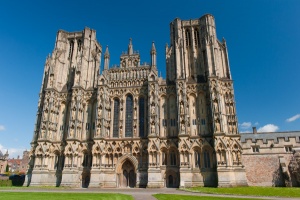 Wells Cathedral
Let's start with those hills that give the region its name. The limestone that underpins the steep ridge is a beehive of caves. The most famous cave, Cheddar, lies at the northwest corner of the Mendips, and may not technically be a part of this region. It is also a very crowded little village and sadly overwhelmed by tourist-trap businesses.

Much more satisfying for the spelunking enthusiast (loosely speaking, a person who likes caves) is Wookey Hole. Wookey is a showcave, but it remains low-key compared to Cheddar. A guided tour takes about 40 minutes. See if you can spot the legendary Witch of Wookey in the caves. Also at Wookey are the oldest handmade paper mill in Britain, a caves museum, a mirror maze, and a host of other attractions. Wookey is a fun family day out.

Also in the Mendip Hills themselves is Ebbor Gorge Nature Reserve, owned by the National Trust. Investigations at this lovely wooded valley reveal evidence of inhabitation dating back to Neolithic times (about 3000 BC). Archaeologists have found bones, tools, cooking utensils, and ornaments in caves throughout the gorge. Many of these finds can be seen at the museum in Wookey Hole. You can take a nature trail through the gorge, and there are wonderful views out over the Somerset Levels.

Just two miles from Wookey is the jewel of the Mendips, Wells. Technically a city, as it is home to Wells Cathedral, Wells has all the charm of a small village. The Cathedral is one of the architectural highlights of Britain, replete with magnificent Gothic carvings, a unique scissors vault to brace the building against shifting medieval foundations, and a marvellous chapter house. Wells Cathedral houses a wonderful clock, with mechanical knights who exchange blows every hour.

Around the corner from the Cathedral is Vicar's Close, the oldest street of 14th-century houses in Europe. And nestled beside the Cathedral is the moated Bishop's Palace, still the official residence of the Bishop of Bath and Wells.

Just a few miles away from Wells is Glastonbury. The town is dominated by the enigmatic Glastonbury Tor, topped with a 14th-century tower which draws the eye from anywhere on the surrounding Somerset Levels. 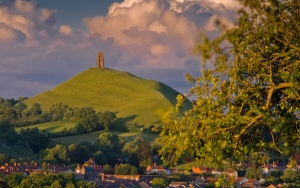 Legend has it that the Holy Grail is buried inside the Tor. The Tor can be climbed for wonderful views, though it can be windy on top.

At the foot of the Tor is Chalice Well, sleeping in a peaceful garden. The well is another of the reputed hiding places of the Holy Grail.

In the centre of Glastonbury is Glastonbury Abbey, at one time one of the richest abbeys in England. During the Middle Ages Glastonbury was one of the premier pilgrimage destinations in Britain, due to the ancient legends associating it with Jesus, the Holy Grail, and King Arthur. To accommodate the flood of pilgrims the abbey built a hotel, now the George Hotel, where weary travellers can still find a bed today.

The abbey is well worth visiting, and in the grounds you can see the burial place of King Arthur and Queen Guinivere. In the 12th century, just when the monks of Glastonbury needed funds to finance the rebuilding of the abbey, they conveniently discovered the grave of King Arthur and Guinivere. You can draw your own conclusions about the tomb, but Glastonbury is a hub of legends about Arthur and things Arthurian, including the Holy Grail. More on Glastonbury here.

Also in Glastonbury is the wonderful Somerset Museum of Rural Life, housed in the Abbey's former tithe barn, and nearby is the Peat Moors Visitor Centre, where you can get a good idea of how early settlers on the Levels lived thousands of years ago.

The Somerset Levels are lovely, low farmlands split by long irrigation canals and the meandering River Brue. They make for a good day out on a bicycle, or a pleasant walk. The Mendip District Council distributes a series of great Rural Walk Leaflets, available at tourist Info Centres throughout the district, and at most bed and breakfasts. 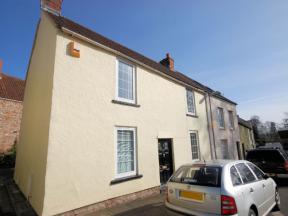 RIGHT IN THE HEART OF HISTORIC WELLS WITH LOVELY CATHEDRAL VIEWS. BRAND NEW KITCHEN AND BATHROOM. This spacious terraced cottage has lovely views of the Cathedral and is perfect for …
Sleeps 4 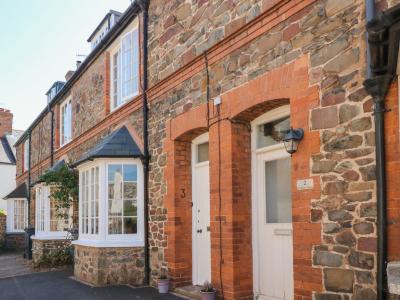 This terraced cottage rests in Porlock, Somerset and can sleep six people in three bedrooms.
Sleeps 6