HERITAGE HIGHLIGHTS:   The graves of King Arthur and Queen Guinivere, though historically dubious, offer a real insight into the medieval mindset. 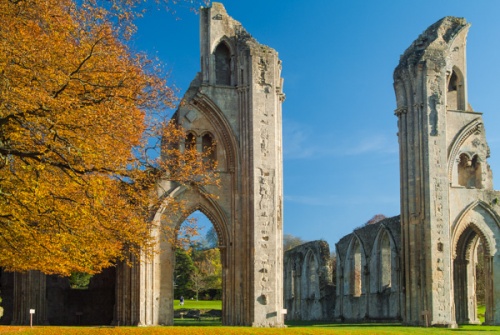 Is there a place more steeped in legend and myth than Glastonbury? Probably not. Legend holds that the earliest church here was founded by St Joseph of Arimathea in about AD 60 and that when he planted his staff in the earth a thorn tree burst forth.

In the grounds of the ruined Benedictine monastery, there is a thorn tree of a variety common to the Middle East which is given to bloom around Christmas time. Could there be some truth to the legend?

We do not know precisely when the first monastery was established at Glastonbury, but excavations on the site and ancient written records suggest that there was a religious foundation here around AD 650.

At the heart of this early monastery was a church built of wattle, known now as the Old Church.

The Old Church was contained within a large enclosure defined by a ditch, along with a cemetery, within which stood at least 2 oratories and several underground chambers. Over the subsequent 300 years, more buildings were erected inside the enclosure.

Sometime before AD 726 King Ine of Wessex built a timber church, dedicated to SS Peter and Paul, east of the Old Church. Around AD 760 Ine's church was extended and joined to the wattle church by an atrium. 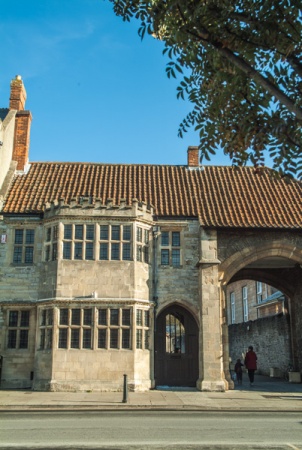 Glastonbury's most famous abbot then took a hand. Dunstan, later sanctified as St Dunstan, served as abbot from AD 940-957, and it was he who added a porch, eastern aisle, and an east tower to the abbey church. Dunstan moved on to become Archbishop of Canterbury in AD 960. Later in the 10th century a chapel, or shrine, was built west of the Old Church; this was later dedicated to St Dunstan.

In the late 11th century Abbot Thurstan (1077-1096) began a completely new church on a cruciform plan. His work was expanded by Abbot Herluin (1100-1118) who ambitiously rebuilt the entire abbey complex - except the Old Church, which must have held a special status among the monks, for it was retained unaltered.

Herluin's plans were completed by Henry of Blois (who served as abbot for 45 years, abbot from 1126-1171). Only 13 years after Henry's death the abbey was almost completely destroyed by a devastating fire.

The first building to be rebuilt was the Lady Chapel, erected on the site of the Old Church in 1184. The ornate design was highly decorated with pointed rib-vaults and crocketed capitals. It set the style for shrines built in other medieval monasteries across England.

The Lady Chapel was ready to be dedicated in 1187, but the great abbey church took much, much longer to rebuild; the eastern end of the nave and central tower were complete by 1320, and the nave by 1334.

No sooner was the church complete - or perhaps before then - Abbot Monington had the east end rebuilt, adding a retrochoir and a huge east window. He also had the Lady Chapel joined to the main body of the church by a Galilee, or porch. 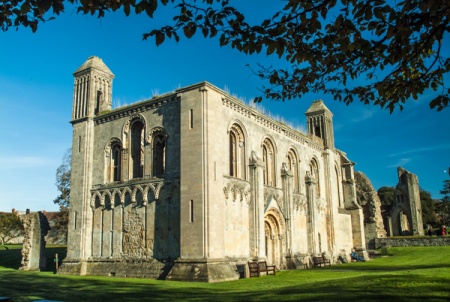 Under the rule of Abbot John Chinnock (1376-1420) the other major buildings within the abbey compound took shape, with a traditional Benedictine cloister bounded by a chapter house, dortoir, refectory, and undercrofts.

There was a detached monk's kitchen, but the most distinctive feature was the abbot's kitchen, west of the south cloister range. The kitchen was built by an earlier Abbot, John de Breynton, and dates to 1334-1342. The extensive abbot's quarters contained a special suite of apartments for important guests. Henry VII is known to have stayed here when he visited Glastonbury.

The devastation of the late 12th-century fire might help explain why the monks of Glastonbury put so much effort into making their abbey a destination for pilgrims. They moved relics of two Saxon-era abbots, Patrick and Indracht, from the ancient cemetery into the Lady Chapel in 1186. They conveniently 'discovered' the bones of St Dunstan and housed them in a specially-built portable shrine.

Then in 1191, the bones of King Arthur and Queen Guinevere were unearthed near the south side of the Lady Chapel. In 1278 these relics were reburied by the high altar in the presence of King Edward I. The royal couple lay beneath a black marble tomb, between the tombs of the Saxon kings Edmund Ironside and Edmund I.

Another draw for pilgrims was the tomb of Edgar I, who was reburied in a specially built eastern chapel sometime in the late 15th century. 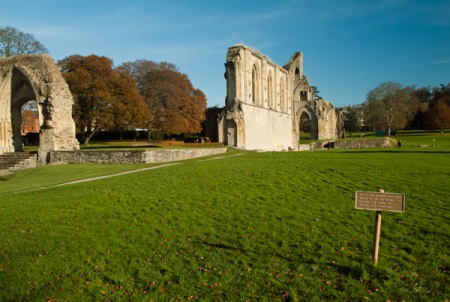 The mythology of Glastonbury's foundation developed over the centuries, and by the mid-14th century, Joseph of Arimathea was firmly established as the abbey's founder. A chapel in the cemetery was dedicated to Joseph in 1382. So important did Joseph's shrine become as a place of pilgrimage that the Lady Chapel was rededicated in his name.

About 1500 an undercroft was dug under the Lady Chapel and Galilee, apparently so that pilgrims visiting the shrine of St Joseph could access an ancient well that may have existed before the abbey was founded.

By the late Middle Ages Glastonbury had become the richest abbey in England, due to the heavy pilgrimage trade. It was rich enough to build an inn for well-to-do pilgrims (the George Inn, on nearby High Street, which still welcomes guests 500 years later).

The Last Abbot of Glastonbury

Throughout much of the medieval period, Glastonbury was the second wealthiest monastic house in Britain, after only Westminster Abbey. But that counted for nothing when Henry VIII decided to dissolve the monasteries in the 1530s.

Like most abbots across the country, Whiting signed the Act of Supremacy in 1534, naming Henry VIII as the head of the Church in England. But that acquiescence would only postpone the inevitable.

By 1539 Glastonbury was the last remaining monastery in Somerset. When pressed by the king, the abbot refused to surrender the Abbey, claiming (rightly) that the Act for suppressing the lesser houses did not apply to Glastonbury.

Thomas Cromwell, the prime mover of Henry's suppression of the monasteries, had Whiting imprisoned in the Tower of London. There Cromwell questioned the Abbot himself, and, not surprisingly, found him guilty of treason and sentenced him to death.

A possible pretext for the charge of treason might be that a book opposing Henry VIII's divorce from Catherine' of Aragon was supposedly found among Whiting's belongings. Later conspiracy theories have suggested that Cromwell was really after treasure that he believed was hidden at Glastonbury, and that Whiting courageously refused to tell him its whereabouts.

One theory that has taken hold over the years is that the abbots of Glastonbury had been entrusted with hiding the Holy Grail. The story goes that this secret was handed down from one abbot to the next. Whiting knew the secret, and this knowledge he took to the grave.

Whatever the pretext, Cromwell was on shaky legal ground. Whiting, as Abbot of Glastonbury, was a member of the House of Lords, so he should have been brought before Parliament to answer any charges.

Cromwell was not too bothered by legality, however, and acted without waiting for the due course of the law to take effect. He had Whiting sent to Wells, where a mock trial took place on 14 November 1539. Whiting was accused of 'robbing Glastonbury church', and found guilty.

On the following day, he and two of his monks were taken to Glastonbury. They were placed on hurdles and dragged through the town to the top of Glastonbury Tor, where all three men were hanged, drawn, and quartered. Whiting's head was put on display over the gate of his abbey, while his severed limbs were displayed to the public at Ilchester, Bridgwater, Bath, and Wells.

And thus the last abbot of the most powerful monastery in England perished. Whiting was beatified in 1895. When archaeologist Frederick Bligh Bond excavated the abbey in the early 20th century he found bones he believed to be those of Abbot Whiting. 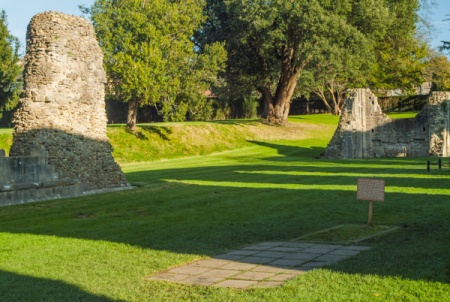 After the abbot's death, the abbey was looted for building stone, and a colony of weavers was set up on the monastic site. It was not until 1908 that the grounds were bought by the Bath and Wells Diocesan Trust, and the ruined abbey buildings were restored so that visitors could once again enjoy this remarkable historic site.

The abbey is entered through the Abbey Gatehouse, an imposing arched gateway located on off Magdalene Street. Visitors pass through a fascinating museum depicting life at Glastonbury during the Middle Ages and then enter the Abbey grounds proper.

The first building you see on entering the grounds is St Mary's Chapel, a roofless structure that boasts wonderful architectural details, from the recessed arches of the door to the repetitive arcading that rings the interior. Look up, where the curious small towers at each corner of the chapel seem almost Georgian in style. 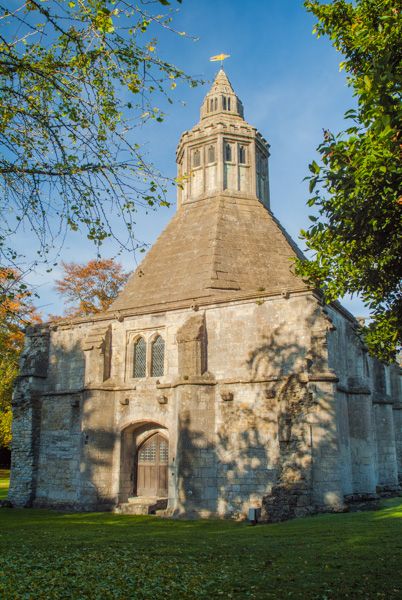 If you continue past the chapel you will soon reach the Abbot's Kitchen, probably the most recognizable symbol of the Abbey, and subject of numerous postcards! This is a peculiar building, with a high octagonal tower over a square base bedecked with gargoyles. The interior is notable for the very large ovens and the high dome supported on reed-thin vaulting ribs.

Return from the Abbot's Kitchen towards St Mary's Chapel and you will pass a small sign on the green lawn. This marks the old burial ground, where, in the 12th century, monks conveniently found bones beneath an engraved stone indicating the burial place of legendary King Arthur. The bones and those presumed to belong to Arthur's queen, Guinevere, were reburied within the Abbey Church, where a small memorial can be seen.

The grounds of Glastonbury Abbey emanate a sense of calm and peace; it is truly a magical place and taken as a whole with the other attractions of this ancient town, make Glastonbury well worth an extended visit.

Outside the grounds are the abbey tithe barn, which now serves as the Somerset Rural Life Museum (well worth a visit), and 4 miles away at Mere is the abbey's Fish House, where fish was salted and cured.

A short stroll will bring you to the base of Glastonbury Tor, where you will find peaceful gardens surrounding the Chalice Well. Then there is the Tor itself, with the lonely tower of St Michael standing like a sentinel, looking out over the Somerset Levels. This is a magical place, a place of wonder and legend. A place not to be missed. 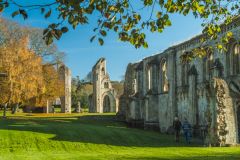 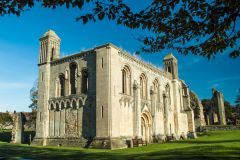 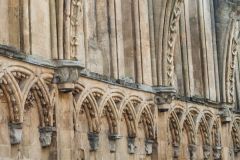 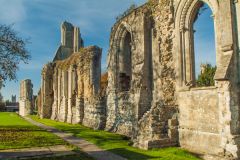 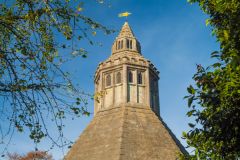 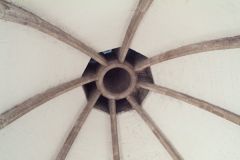 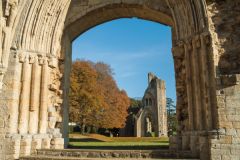 More self catering near Glastonbury Abbey

Self Catering near Glastonbury