Legends of Glastonbury - Joseph of Arimathea 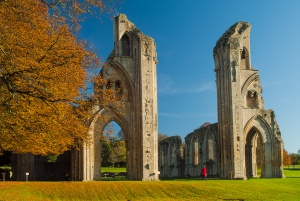 There are so many myths associated with Glastonbury that it is difficult to know where to begin to talk about them. There are two main streams of legend that surround Glastonbury, though they twine around each other to some degree. The two streams revolve around the romantic figures of Joseph of Arimathea and King Arthur. Let's take them one at a time.

Joseph of Arimathea
Joseph was the Biblical figure who took Jesus' body after the crucifixion. According to some legends he was actually Jesus' uncle and had visited Britain years before with Jesus in the pursuit of his interests in the tin trade. It appears that there actually was a strong Jewish presence in the west of England at that time, and many of the tin miners may have been Jewish settlers.

At any rate, when Jesus died, Joseph thought it prudent to flee Palestine, and after many travails, he came to Britain with a company of followers. He brought with him the Holy Grail, the cup used by Jesus at the Last Supper. Some versions of the legend have it that the Grail contained two drops of blood captured from Jesus' side when he was wounded on the cross.

When Joseph came to Britain he was granted land at Glastonbury by the local king. When he arrived at Glastonbury, Joseph stuck his thorn staff in the earth, whereupon it rooted and burst into bloom. A cutting from that first tree was planted in the grounds of the later Glastonbury Abbey, where it continued to bloom every year thereafter at Christmas time. There is still a thorn tree in the Abbey grounds, of a variety native to the Holy Lands, and it does indeed bloom around Christmas time.

Joseph was said to have established the first church in England at Glastonbury, and archaeological records show that there may well have been an extremely early Christian church here. What happened to the Holy Grail is another matter. Some legends have it that Joseph buried the Grail at the foot of Glastonbury Tor, whereupon a spring of blood gushed forth from the ground.

There is a well at the base of the Tor, Chalice Well, and the water that issues from it does indeed have a reddish tinge to it, from the iron content of the water.

Other legends have it that the Holy Grail was interred with Joseph when he died, in a secret grave. The search for the mysterious Grail emerges again and again in the tales of Glastonbury.

Further legends tell that the church founded by Joseph continued for many years. Eventually, it became a monastery, and one of the first abbots was the future St Patrick, who was born in the west country.

More Legends of Glastonbury:
King Arthur and the Holy Grail