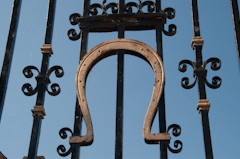 When you walk through the wrought iron gates that seperate the castle grounds from the town to the south, you will see an upside-down horseshoe incorporated into the design of the gates. The horsehoe is a reminder of an intriguing custom that has bneen associated with Oakham Castle for well over 500 years. According to custom, whenever a peer of the realm visits Oakham for the first time, they must present a horseshoe to the lord of the manor of Oakham.
These horseshoes are hung upon the walls of the castle great hall; in fact, there are so many that they take up almost all the available space on the walls! Now, if you haven't seen the Oakham horseshoes before, you may be picturing a little iron shoe about the size of a man's hand, but that would be far from the truth. The Oakham horsehoes are huge; they were meant to be impressive, and to reflect the status of the giver.

The origins of this peculiar custom go back to the de Ferrers family, one of whom, as we mentioned in our article on Oakham Castle, built the great hall we can see today. The Ferrers name has its roots in the French word for farrier, and the de Ferrers have used the horseshow as a symbol on their coat of arms since 1066. No one knows for certain, but it seems likely that the Ferrers demanded that visitors present a horsehoe as a form of tribute (or, perhaps, visitors thought it prudent to do so, to curry favour with the lords). 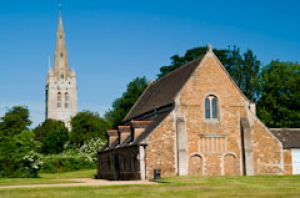 However the custom originated, it seems plausible that when the custom really began to take hold in the 14th century it was merely the reflection of a tradition that was already in existence for centuries. The first horseshoe in the castle collection was given by King Edward IV, in thanks after his victory at the Battle of Losecoat Field (near Empingham) in 1470. Edward's horseshoe was  decorated with the royal arms, and many of the horsehoes given over the subsequent centries are gilded and highly ornamental.

Many more are decorated with coronets to indicate the rank of the donor. This custom began in 1784 when the 2nd Earl Spencer donated a shoe with his ducal coronet. The informative castle custodian informed me that some of the coronets are wrong; that is, some earls have a duke's coronet, and vice-versa!

One fascinating sidelight revolves around the two huge horsehoes donated by the future Queen Victoria and her mother, Alexandra. These two ornate horseshoes are the only two shoes that are touching. We know that they were installed that way, and that every other horseshoe was carefully set so that it did not touch any other. One inference we can draw from that fact is that Princess Victoria's mother was making a point about her importance, and her unwillingness to let go of her authority over the future queen!

The Oakham Castle horseshoes were not originally on display inside the castle. They were originally stuck up on the wooden gates which stood where the Georgian stone gateway to the castle grounds now stands. Unfortunately, the horseshoes on public display had a habit of 'disappearing', so they were eventually moved inside the Great Hall.

As you go around the hall, you will notice that there is a large gap in the years represented by the horseshoes on display. This is because a great number of them were melted down as scrap metal to help the war effort during WWI. As a result, there are almost no Elizabethan horsehoes, and a comparatively large number of Georgian and later ones!

Note: We'd love to show a photo of the horseshoe collection at Oakham Castle, but we can't because of restrictions on publication imposed by the castle administration - sorry about that!