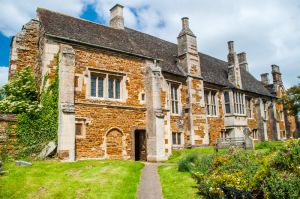 The Bede House is all that survives of a medieval Bishop's Palace owned by the Bishops of Lincoln. During the medieval period Lyddington was an important residence, and frequently housed the bishop's entire household.

The Bede House was later owned by Sir Thomas Cecil, the son and heir of William Cecil, Lord Burghley. The younger Cecil converted the Bede House into an almshouse known as Jesus Hospital, with accommodation for a dozen poor bedesmen and two poor women.

A bedesman was originally someone who received a benefit in exchange for saying prayers for the soul of a donor. In the later medieval period, a bedesman became simply the recipient of charity.

The small chambers used by the inhabitants of the almshouse can be viewed, as can the ornate former Great Chamber used by the Bishops. The most interesting feature in the Great Chamber is the ornate, carved cornice, which is a wonderful example of medieval woodwork.

Visitors can ascend to the attic (second floor) where you can get a close look at the 'bones' of the building, including how the large roof timbers were fastened together without the aid of nails. The rooms are unfurnished, save for the Great Chamber, so you really get a good idea of how the house is constructed.

History of the Bede House

We do not know for certain when the bishop's palace was established at Lyddington. Excavations have shown that there was an enclosed site of about 2.5 acres here as early as the 11th century. It seems likely that this enclosure was a manor held by the Saxon Bardi. This manor was seized by William the Conqueror after the Norman Conquest, and granted to Remigius, named by William as the first Bishop of Lincoln. 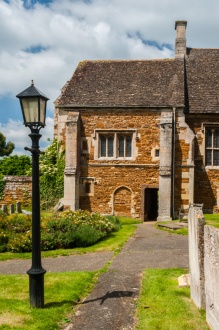 The Bede House
from the churchyard

That house was expanded several times over the ensuing centuries, as the bishop's sought to increase their property in the area. By the 13th century, the first mention of an official residence for the bishops is made.

Bishop Robert Grosseteste installed the first vicar of Lyddington in 1235, and sometime around then an unfortunate man also named Robert was hanged for stealing a ham from the pantry at Lyddington. On a more positive note, the letters patent for the foundation of Balliol College at Oxford were signed and dated at Lyddingon on 13 June 1284.

In 1334 Bishop Henry Burghersh, an inveterate builder, received permission to crenellate his palace at Lyddington. Around that time he built large fishponds in nearby Little Park to supply his household with food.

The palace was further rebuilt in the 15th century when it was not unusual for the bishop and his entire retinue to stay at Lyddington for weeks at a time. Tradition says that a major 15th-century rebuilding was carried out on the orders of Bishop William Alnwick, but a final rebuilding took place at the end of the 15th century under John Russel, and his successor, William Smith. It is this last period of rebuilding which helped give the Bede House its current form. It is during this last phase that the fabulously carved cornice in the Great Chamber was installed.

In 1547 the palace was seized by the crown as part of the ongoing attempts by Henry VIII and his successors to subjugate the church in England. It eventually passed to the Cecil family of Burghley. In 1600 Thomas Cecil refounded the palace as an almshouse to house a dozen men, two women, and a warden.

Looking at the foundation of the Bede House gives a fascinating glimpse into late Elizabethan attitudes. The bedesmen were chosen by Lord Burghley himself. Candidates were required to be free from French pox (syphilis), lunacy, and leprosy, and have an honest profession or trade of some kind.

They had to attend prayer twice a day, and Lord Burghley drew up a list of fines for skipping prayer and for other offences. They had also to vow not to be idle, but practice some handicraft. The Bede House continued to serve as an almshouse, offering accommodation for poor people until 1930.

I really enjoyed visiting Bede House. It's a lovely old building and features bits and pieces covering many centuries. The timber cornice in the Great Chamber is absolutely stunning; a fantastic piece of late medieval craftsmanship. After you've done visiting the Bede House, pop next door into the church, which once housed an unusual set of jars set into the wall of the chancel in order to improve acoustics. 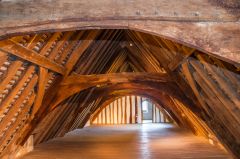 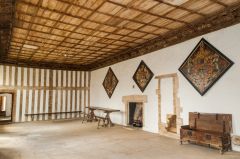 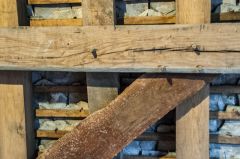 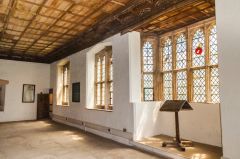 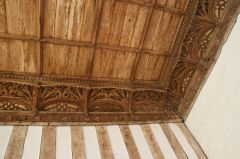 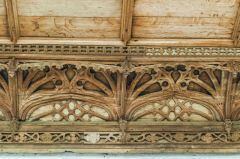 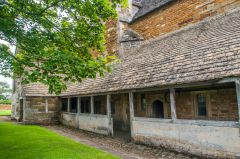