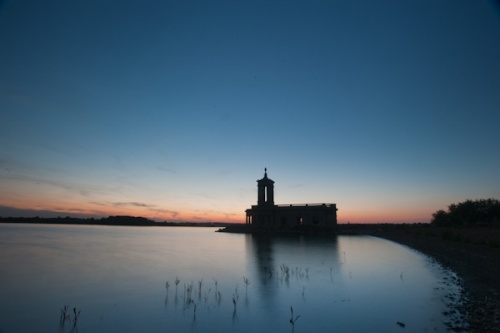 The area we now know as Rutland was settled at least as early as the Mesolithic period, some 5-6000 years ago. Evidence of settlement is scanty, but we are on much firmer ground when it comes to the Roman era. The Roman Ermine Street ran through the ara on its way from London to Lincoln, and evidence of large villas has been discovered. They built a fort at Great Casterton, and later expanded the fort to create a town.

But it is really in the Saxon period that Rutland began to thrive. It seems highly likely that the area was owned in part by Saxon royalty. Edward the Confessor gave 'Roteland' to his wife Edith, and Rutland later formed part of royal hunting land given as a dowry to subsequent queens. The village of Edith Weston, on the shore of Rutland Water, takes its name from Queen Edith, and the 'Weston' suggests the presence of another royal holding to the east.

By the time of the Domesday Book, every Rutland village now in existence had already been formed. In other words, every place you can visit today existed as a community at least 1000 years ago. But at the time of Domesday Rutland did not exist as a separate entity.

Rutland first appears as a unique entity in 1155, and as a county in 1204, when King John gave it to Queen Isabella. Powerful landowners owned much of Rutland in the medieval period, the most prominent being the de Brus and, later, the Harington families.

A later Harington, Sir John, acted as guardian to King James's daughter Elizabeth. As he was given no recompense for the honour, it bankrupted him. To meet costs he minted his own brass farthings, but these were soon proved worthless, giving rise to the old saying, 'not worth a brass farthing'. After Harington's death his heirs were forced to sell the family home at Exton Park. A monument to Sir James Harington and his wife is in the church at Ridlington.

In 1180 a Norman baron named Walkelin de Ferrers built the Great Hall of Oakham Castle, replacing an earlier Saxon structure. Ferrers' symbol was an upside-down horseshoe, and the connection of horseshoes with Oakham was set to continue for the next eight centuries. By tradition, every peer of the realm visiting Oakham must give a ceremonial horseshoe to the lord of the manor. The collection of horsehoes, some extremely large and ornate, now fill the walls inside the great hall.

The Forest of Rutland was a royal hunting ground in the 13th century. The forest gradually reduced in size over the centuries, and today the last remaining vestiges can be found at Stoke Wood, Wardley Wood, and Beaumont Chase.

Perhaps the most dramatic moment in Rutland's history came in 1470 when it was the scene of a pivotal battle in the Wars of the Roses. Forces under Sir Robert Welles rebelled against Edward IV. The King took Welles's father hostage, and ordered Welles to disperse his men.

Sir Robert refused, so Edward killed the older Welles within sight of the rebel army, and ordered his men to attack. The rebels were put to flight, and many threw off their distinguishing jackets to escape capture, giving the Battle of Empingham its alternative name, the Battle of Losecoat Field. The battle site, near the Great North Road, is still called Bloody Oaks today.

Accommodation
Self Catering in Rutland


More self catering in Rutland