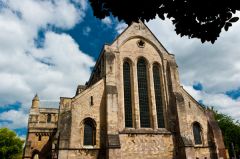 A community of Benedictine nuns was established at Romsey around 907 AD by Edward the Elder, son of Alfred the Great, posibly on the site of an even earlier monastery incorporating both monks and nuns. There were initially 100 nuns, and Edward named his own daughter, Elfleda, as abbess. Later in the 10th century King Edgar undertook to reorganise and reinvigorate the monastic tradition in his realm, and he placed his own daughter in Romsey Abbey. He obviously held the area in great esteem, as he also buried his son at Romsey.
The nuns were drawn from the highest social stratum; daughters of rich and powerful nobles. The abbey exercised considerable influence and was a large property owner in the area. There were two manors at Romsey; the area surrounding the abbey was known as Romsey Infra, and here the abbess reigned supreme. She was lord of the manor, held her own hundred court, and controlled markets and annual fairs. She answered directly to the royal sheriff of the county. The abbess was also lord of the manor of Romsey Extra, the area surrounding the inner town, where she held fewer powers.

The only substantial part of the abbey to remain today is the church, which is still known as Romsey Abbey and serves as the parish church for the town.

During the early medieval period the children of important nobles were educated at Romsey. Two daughters of King Malcolm of Scotland were educated at Romsey. One of these daughters was Matilda, whose aunt Christina was a nun in the abbey. William Rufus, son of William the Conqueror, came to Romsey with the intention of convincing Matilda to marry him. The girl's aunt took a violent dislike to William (most people did) and drew a veil over Matilda's face, declaring, untruthfully, that she had already taken monastic vows.

When William was killed while hunting in the New Forest, his younger brother Henry I came to Romsey to woo Matilda. Presumably Christina found the young king much more appealing than his elder brother, and an agreement was reached for Matilda to wed Henry. This she did, and she later became known as Good Queen Maud, due to her charitable works. A later princess, Joanna, daughter of King John, lived at a nearby royal hunting lodge while attending the Romsey Abbey school.

Henry II and Archbishop Thomas Becket are known to have stayed at the abbey while waiting for ships at Southampton. Edward I also stayed on several occasions. The prominent position occupied by Romsey Abbey waned after the royal court moved from Winchester to London after Edward's death.

When the Abbey was dissolved in 1539 the people of the town convinced Henry VIII to allow them to purchase the abbey church for use as the parish church. Four prominent townsfolk, called the four Guardians, convinced the king to sell them the abbey church for the sum of £100. The deed of sale, signed by Henry, is on display.

What happened to the nuns after the abbey was dissolved? We don't know, with one notable exception. One of the nuns was Jane Wadham, a cousin of Jane Seymour, Henry's third queen. Wadham married John Foster, the last abbey chaplain and former steward. Henry VIII objected, but Jane countered, claiming that she had been forced to become a nun at a young age, against her will, and thus her vows were void. The daughter of John Foster and Jane Wadham married Sir William Fleming of Broadlands, a former abbey property and later home of the Mountbattens.