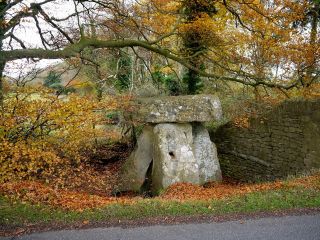 The stones may have come from a chambered tomb, but if so, the tomb was not in this location originally. The burial chamber was erected around 1859, possibly after a public appeal for funds, on the meeting place of the county boundaries. So, even if the stones originally came from a burial chamber, the site might more accurately be described as a 'folly'.

Another version of the site origin suggests that the chamber was built around 1736, reusing stones from an existing tomb. When a hole was excavated to support the Gloucestershire stone, the bones of three skeletons were unearthed along with a coin from the reign of James II.

The upright stones are about 2 metres high and 1 metre wide. The capstone is roughly the same shape and size. Within the chamber is a cist, or stone chest built from 4 stones.

The location is close to the point where tradition suggests that St Augustine met a group of British bishops during his mission to convert the British Isles to Roman Catholic Christianity.

So, are the Three Stones a legitimate ancient monument? It seems unlikely, and even the provenance of the stones is subject to doubt.