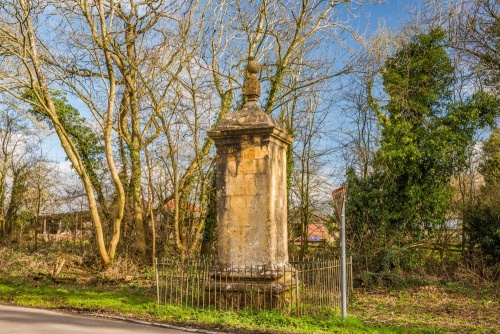 Though it carries the name 'Four Shire Stone', the monument is not a single stone, but a pillar composed of multiple blocks of locally-quarried Cotswold stone, a honey-coloured limestone, topped with a peculiar ball and finial over a dome and cornice. From top to toe the monument stands over nine feet tall (almost 3m).

The Four Shire Stone stands just off the A44 road, about 1.5 miles east of Moreton-in-Marsh. 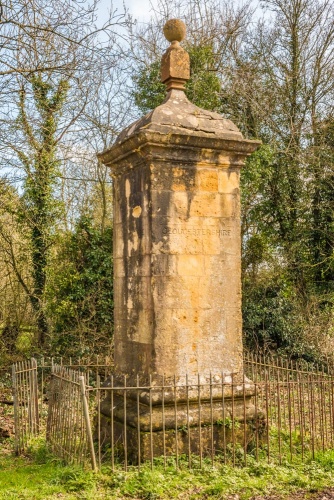 The Gloucestershire (west) face of the stone

As for Evenlode, it was until 1931 a 'peculiar' of Worcestershire. That is, it was a detached part of the county completely surrounded by Gloucestershire, like an island in the sea. That anomaly was rectified in the only sensible way possible with Evenlode becoming a part of Gloucestershire. 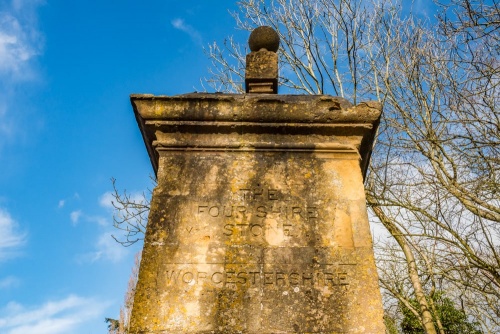 Though the Four Shire Stone itself probably dates to the 18th century, the inscriptions that mark each face were not added until a century later. The south face is inscribed in capital letters with 'THE/FOUR SHIRE/STONE/WORCESTERSHIRE', the west face with 'GLOUCESTERSHIRE', the north face with 'WARWICKSHIRE', and the east face with 'OXFORDSHIRE'. All four faces of the monument have copious amounts of graffiti added by visitors over the centuries. I spotted several examples of mid-Victorian graffiti, with names and dates.

It seems very likely that the monument we see today stands on or near the site of an early Four Shire Stone. A carving in the form of a woman on a pedestal appears in Wenceslaus Hollar's 'An Orthographical Designe of Several Views Upon Ye Road, in England and Wales' in 1660 and a 'Four Shire Stone' is shown on John Ogilvy's 1675 map of the route between London and Montgomery. 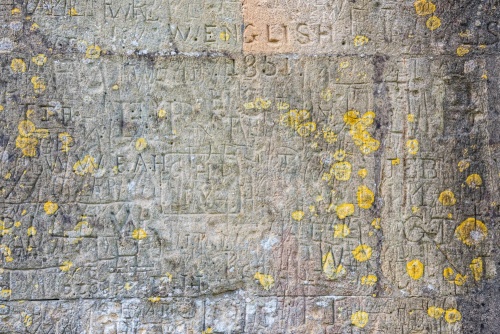 Another source that speaks of an older Four Shire Stone is Sir Thomas Habington or Abington (1560–1647), who referred to the stone in his Survey of Worcestershire. I've modernised the language to make it more easily readable:

Writing of Evenlode manor, Habington states, 'This manor is in King Edgar's charter written Eoymland, and included by him in the hundred of Oswaldeslawe, which, although separated from our Shire with parishes not attending the county, yet is wholly ours, and joins on Moreton Henmarsh [Moreton-in-Marsh] heath on the stone which touches four shires, a thing rarely seen ...' 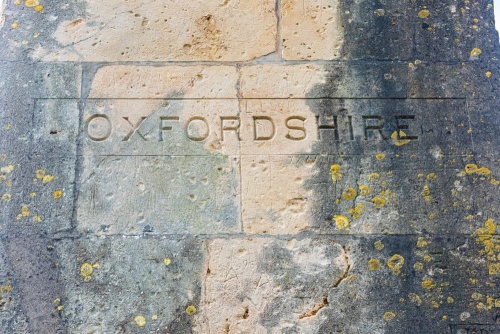 Writer and academic JRR Tolkien, author of The Hobbit and The Lord of the Rings trilogy, had close ties to the area and is thought to have been inspired by the Four Shire Stone to create the Three-Farthing Stone in his imaginary land of The Shire.

In Tolkien's magical fantasy world, the Three-Farthing Stone stood beside the East Road at the meeting point of the Westfarthing, Southfarthing, and Eastfarthing, near the geographical centre of The Shire.

It was here that Samwise Gamgee cast the last remaining dust of Lothlorien into the air in the hopes that it would help heal The Shire after the depredations of Saruman and his henchmen.

There is another Tolkien landmark close by; The Bell Inn in nearby Moreton-in-Marsh is thought to be the inspiration for the Prancing Pony in Bree. Tolkien would often meet at The Bell with his brother Hilary, as the inn was roughly halfway between Oxford, where Tolkien was the Merton Professor of English Language and Literature, and Evesham, where his brother owned an orchard and farm. 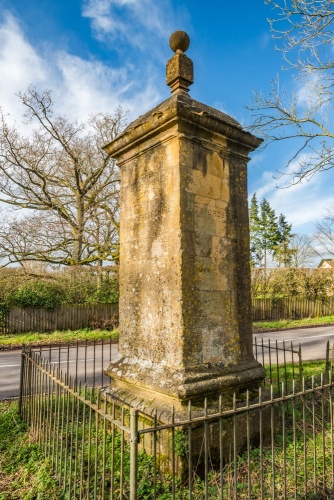 The Stone from the A44 verge

The Four Shire Stone is not the only monument to mark the meeting place of English counties. To the south, near Colerne, are the Three Shires Stones, a Neolithic burial chamber near the point where the counties of Somerset, Gloucestershire, and Wiltshire met. These stones are also said to have inspired Tolkien, but it seems most likely that the Tolkien connection is much stronger here at the Four Shire Stone.

In the Lake District National Park, far to the north, a standing stone known as the Three Shire Stone marks the former meeting place of Westmorland, Cumberland, and Lancashire. Westmorland and Cumberland were, of course, combined to form the present county of Cumbria, and the border of Lancashire was moved, so that today the stone doesn't mark any county boundaries!

Most sources I have seen simply say that the Four Shire Stone is on the A44 east of Moreton-in-Marsh. Technically, this may be true (though I would argue that the stone is actually on the minor road leading off the A44 in the direction of Great Wolford, to the north), but that's splitting hairs; it is so close to the junction of the two roads that it really makes no difference.

The trouble is that there is no easy place to stop on the A44. 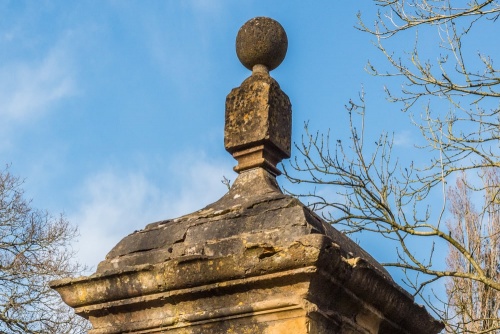 The decorative top of the Stone

I suggest turning off the A44 and finding a spot to park along the verge of the Great Wolford road. There is no dedicated parking, but there are several slightly wider places along the verge in both directions that you should be able to pull far enough off the roadway to be out of the way of traffic.

Please don't park too close to the junction! Though the road to Great Wolford isn't that busy, especially not compared to the A44, it is still used by local traffic, so please park safely.

Note: I faced a dilemma when trying to decide how to list the Four Shire Stone as an attraction. Which county should it go under? The official English Heritage listing has it in the parish of Little Compton, Warwickshire, but in the end, I decided to go with Gloucestershire, since the nearest large settlement is Moreton-in-Marsh.

Self Catering near Moreton-in-Marsh