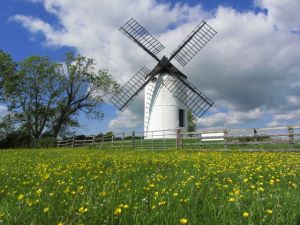 Ashton Windmill
Ashton Windmill is an 18th-century mill on the Isle of Wedmore, above the Somerset Levels. The mill offers great views over the Levels, Cheddar Gorge, and the Mendips. The mill has all its original machinery in working order.

The location is well chosen, for the high ground of the Isle of Wedmore catches the wind from several different directions.

The first written record of a mill here dates to 1317. We know very little about that early building, but we do know that in 1549 it was recorded as being in a very poor state. John Mawdeley, a wealthy merchant from Wells, was granted a 50-year lease on condition that he restore the mill to working order.

In 1705 a notary from Wells named John Paine, Jr. took out a 60-year lease on the mill and manor. It was very likely the Paine family who erected the mill we see today.

The mill was built in its present form around 1760, on the mound used by a former post mill, and reusing timbers from an earlier building. The building is 25 feet high, with a diameter of 12 feet. The stone walls are 2 feet thick, and support sails 44 feet across. The cap atop the mill was thatched until 1900, then it was converted to an iron frame and a pair of spring sails were fitted. Today only the sail frames are displayed, without canvas.

The mill ground corn for flour and beans to feed livestock. Sacks of grain were hoisted to the top floor and fed down through hoppers to the millstones.

The mill ceased work in 1927 and stood derelict for 30 years, though it did briefly serve as a Home Guard post during World War Two. It was restored in 1958 and is now operated by the Sedgemoor District Council.

The nearest postcode for satnavs is BS26 2PP.

More self catering near Ashton Windmill >>