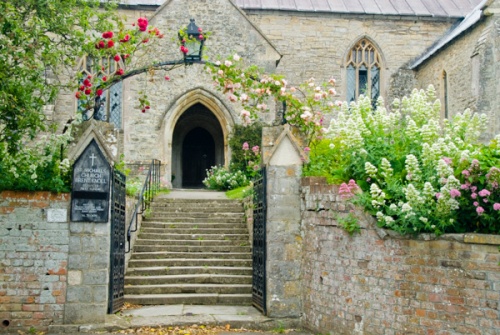 The church of St Michael at Brent Knoll stands on a rise above the village. It is a small building, with a Norman doorway. The bulk of the church is much later, however, with a tall Perpendicular tower, and early 14th-century south porch and south transept.

Most people come to Brent Knoll to see its famous carved bench ends. Though most of the benches boast impressive medieval carvings, three, in particular, are of interest to most visitors. These three benches make up an allegorical cartoon.

In the first bench, a figure of a fox dressed in the robes of an abbot preaches to a flock of birds, probably geese. Above the fox a chained ape holds a bag of money aloft. Below the abbot's feet two monkeys roast a pig on a spit.

In the second panel, the fox has been placed in leg irons and is imprisoned in the stocks, while a monkey stands guard over him. In the third panel the geese have hung the fox, while dogs bark triumphantly. 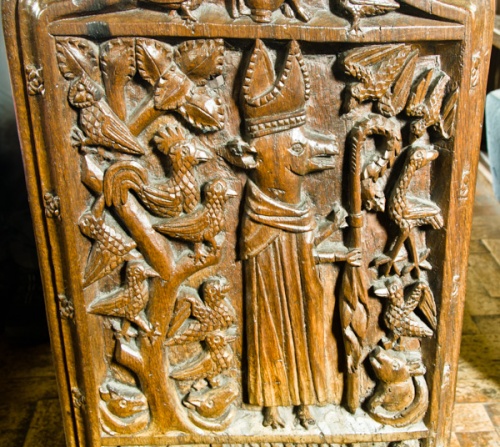 Bench end of an abbot dressed as a fox

The traditional explanation for the bench ends is that they are the villager's way of expressing their feelings towards an avaricious abbot of Glastonbury Abbey. It seems that the abbot (the fox) taxed his tenants (the geese) heavily.

The villagers would have dearly loved to hang the abbot, but had to settle for hanging his effigy to show their feelings! The village pub is aptly named The Fox and Geese, a tribute to the bench end carvings.

It was a common medieval belief that the pelican drew blood from her own breast in order to feed her young, and the pelican became a Christian symbol of sacrifice.

Several of the bench ends depict the quasi-pagan symbol of the Green Man, a woodland figure with leaves and vines trailing from his mouth.

The carved Jacobean pulpit is quite beautifully carved, though simple in design. The most obvious remaining feature inside St Michael's is the large memorial on the south wall near the door. This is to John Somerset (d. 1663) and shows the carved figure of Somerset in three-quarter relief, set into an oval niche.

On either side of Somerset are his two wives, each brightly painted. Above is a relief of the Somerset family at prayer, and another showing him rising from his tomb. 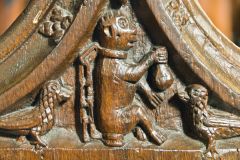 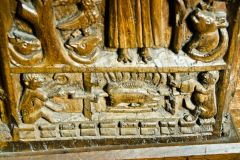 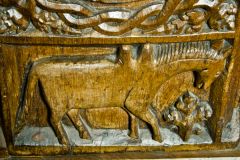 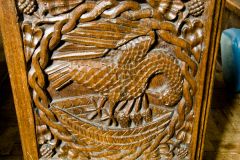 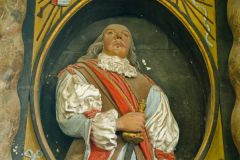