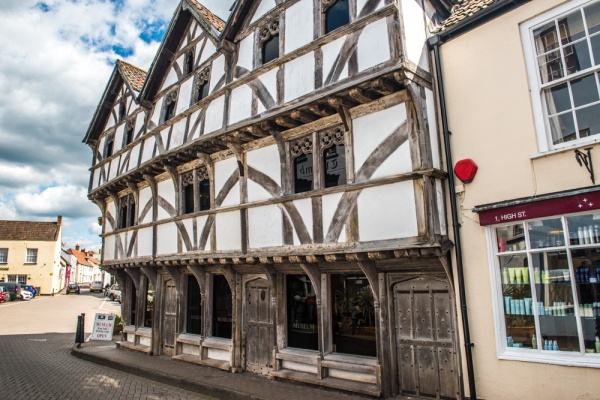 King John's Hunting Lodge is a beautiful timber-framed building in the marketplace in Axbridge. The Lodge is a well-preserved wool merchant's house built in the late 15th century, and it now houses a fascinating local history museum.

The Lodge was built around 1460, long after the reign of King John. The origins of the name are a mystery but may have to do with the fact that part of the building was once used by The King's Head Inn. A carved head of a king projected from the building, though it isn't clear whether the head was meant to represent King John or another monarch. A replica of the king's head is in place outside the building, and the original is in the museum inside.

The name 'King John's Hunting Lodge' did not appear until 1915, and is doubly peculiar in that there is no history of the building ever being used as a hunting lodge by anyone, royal or otherwise!

The first record of a building on this site in central Axbridge comes from 1340 when John Oldeway owned a building called 'the stockhouse', containing several shops. Think of it as a sort of medieval mini-mall. The current building was constructed around 1460, with space for shops on the ground floor, living and workshop areas above, with sleeping areas and storerooms on the top floor.

The building is jettied on two sides (that is, it projects out over the street). The weight of the projecting upper stories is carried on a king post in the corner, tied to dragon beams which support the flooring.

The building was owned by an antique collector named Miss Ripley in 1930, who used it to store her collection and opened the doors to the public one day each year. In 1968 it was given to the National Trust, who restored the building, reverting to its original function, with arcaded stalls opening onto the street.

Although the building is owned by the National Trust, it is operated as a local history museum, for which there is a small entrance charge, even for Trust members.

The museum, operated by the Axbridge and District Museum Trust, covers the social history and geology of the Axbridge area, with themed rooms covering one particular time period or feature of local life.

The exhibit of archaeological finds includes objects found in Cheddar Caves and Ebbor Gorge. Look for the 'Axbridge Nail', a rounded merchant's table with a raised lip to prevent coins falling over the edge. In addition to permanent exhibits, there are also temporary displays reflecting local heritage themes.

King John's Hunting Lodge is an excellent example of a medieval timber-framed building. It is incredibly picturesque; so much so that I exclaimed aloud when our family drove past it for the first time and insisted that my wife stop so I could take a photo!

Luckily, I had a chance to return at a later date when the museum was open and enjoy the inside of the building as well! There are two small display areas on the ground floor, where you will find the Axbridge Nail and a door from the town lock-up. Another historic object is the 18th-century town fire truck.

Rickety stairs lead to two further floors of exhibits. On the first floor are several longcase clocks made by local craftsmen, and a beautifully panelled room housing the historic mayor's chair. Another highlight is a framed 15th-century wall painting of St Christopher found in a house at 24 West Street.

In one section of the upper floor, the wall has been stripped away to show the original medieval construction technique. 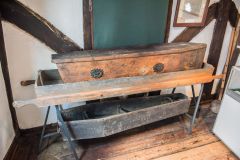