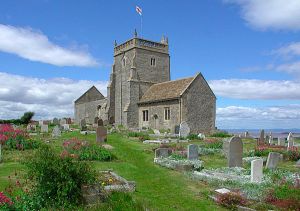 Uphill, St Nicholas Church
St Nicholas church is isolated from the intriguingly named village of Uphill, and stands on a rise just south of Weston-super-Mare, with views over the Somerset marshes and out over the Bristol Channel and the ancient Roman port of Axium.

The village of Uphill is not named for a hill. The name actually comes from the name of a Saxon chief who owned a wharf, or 'pill' at the point where the River Axe flows into the sea.

The church dates to the Norman period, and features a 12th-century door, chancel, and nave, with a central tower. The nave is unroofed and open to the elements. Excavations in 2015 revealed a pit under the floor of the church, suggesting that the church bells were cast on the site.

The church was probably founded sometime around 1080 and was re-consecrated in 1129. It retains a great number of its original medieval features, including grimacing gargoyles, and scratch dials on the south wall. There are two scratch dials flanking a blocked doorway, and a third on the window lintel on the south wall of the tower. This third scratch dial is thought to be late Saxon.

The church stands within the Uphill Cliff Site of Special Scientific Interest (SSSI), preserved for its calcareous grassland that provides a habitat for butterflies. The cliffs beneath the church are pitted with caves thought to have been used since the Stone Age.

There was very likely a timber church atop the cliffs as early as the 8th century. The church would have been used by pilgrims travelling to Glastonbury, who arrived by sea at the port of Uphill. The Saxon church was under the care of the Abbey of St Michael on Steep Holm island. The church was rebuilt in the late medieval period and then restored by Thomas Knytton of Uphill Castle in 1846.

After the new church was built nearby the 'old' St Nicholas fell out of use. The nave roof was removed in the 1880s.

The church is now in the care of the Churches Conservation Trust and is still used for occasional services. Access is on foot up a steep hill, but the reward for your exertions is a wonderful view from atop the hill.