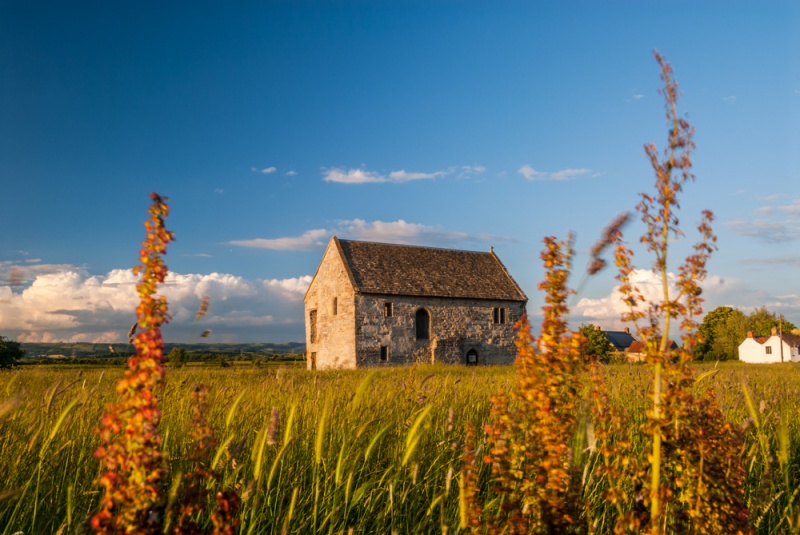 The Meare Fish House is a medieval building once owned by the powerful abbots of Glastonbury. It is the only surviving monastic fish building in England. The Fish House stands on a hill above the former monastic fish ponds which helped supply the abbey at Glastonbury with a steady supply of fish, a staple of the monk's diets.

Historians originally thought that the Fish House provided facilities for salting and drying fish, as well as occasional accommodation for the abbot's 'water bailiff', the man in charge of overseeing the lake and fishery. However more recent research suggests that the building was intended solely as a dwelling.

The house is rectangular, about 12.4 metres long by 6.6 metres wide. There are three rooms on the ground floor; a central hall flanked by 2 service rooms. On the first floor is a large room furnished by a fireplace, suggesting it was used as a private bedchamber. This is linked to a small room. There was originally a turret housing a latrine beyond this small chamber, but the turret was later destroyed.

Evidence of the abbey fishponds survives as a series of earthworks ranging from 20-30 metres long and five metres wide. It is entirely possible that the fisheries at Meare were in existence before the fish house, as the Domesday Book of 1086 notes three fisheries and 10 fishermen in Meare.

Fish was an important staple of the monastic diet, for the monks were barred from eating meat. They usually consumed salted fish brought from the coast, so freshwater fish raised locally were a real luxury and a sign of the abbey's wealth and status.

The fishery raised several species, including roches, pike, tench, and more. A fishery warden was housed in a small dwelling in the churchyard as early as 1252, but sometime around 1330 the new, larger dwelling was erected closer to the fish ponds. From the internal arrangements of the building it seems clear that is was used only occasionally.

The Fish House is thought to have been constructed about 1322-35. It was just one of several buildings owned by the abbey in Meare. The most obvious other reminder of the abbey's medieval presence at Meare is Manor Farm, which incorporates part of the 14th-century monastic manor house.

When Glastonbury Abbey was suppressed by Henry VIII the Fish House passed to Edward Seymour, Duke of Somerset, and it remained in the hands of the Seymour family until the 18th century. It was used as a farm building until it was badly damaged by fire in the 1880s and fell out of use. In 1911 it became only the 4th medieval property in the country to be taken into state care and it is now in the care of English Heritage.

The real significance of the Meare Fish House is that it is a remarkably unaltered example of a early 14th-century house. Though small, the quality of architecture clearly shows that it was a building of high status.

Small fourteenth century houses were rarely more than one storey high, with a central hall and small service chambers arranged around it. The unusual feature at Meare is that there are service chambers above the ground floor hall, reached by an external stair. This arrangement is almost unheard of in a small dwelling before the 15th century, and the Meare Fish House is the oldest known example in England.

Though the Fish House is easily visible in a field off the B3153 as you enter Meare from the east, there is no obvious parking place. I managed to pull off onto the verge of a small lane immediately east of the field and follow a footpath across the field to the building. Alternatively, a longer footpath runs from the side of the churchyard to the west.

The Fish House is usually kept locked, but you can get a key from Manor House Farm, located behind the church. 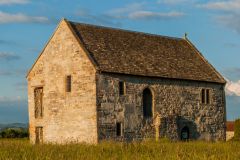 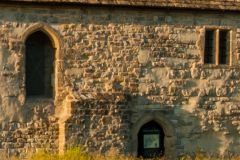 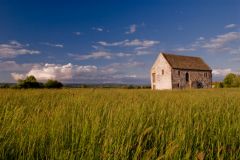