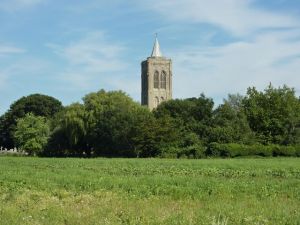 A small village in southeastern Lincolnshire, Gedney boasts a lovely Early English church which once belonged to Croyland Abbey. Within the church are several fine medieval tombs, and a grand alabaster monument to Adlard Welby (d. 1570).

The church was begun in the 13th century, with major alterations in 1890. The scale of the church, and the fact that its tower rises so dramatically over the surrounding flat landscape of the Fens has led to it being known as the Cathedral of the Fens.

Adlard Welby was married twice, first to Ellen Hall, with whom he had 4 daughters and 2 sons, then to Cassandra Apryce, with whom he had 4 more sons and a single daughter. Welby died in 1570 at the age of 63 and Cassandra lived 20 more years before her death in 1590 at the age of 60. The alabaster monument was erected by Sir William Welby, Knight of the Bath, Adlard's 3rd son (and first with his second wife Cassandra).

Aside from the Welby memorial, there is a worn 13th-century effigy of a knight, perhaps a depiction of Falco D'Oyry. Look for the 14th-century memorial brass to an unknown female in the south aisle and a fragmentary Tree of Jesse window at the eastern end of the north aisle.

Gedney was once home to a hospital, founded before the 14th century and dedicated to St Thomas Martyr. The hospital was operated by the monks of Creake Abbey. It was dissolved in 1339 and no trace now remains.

Another historic building, though of much more recent vintage, is Gedney railway station, built in 1862. The station formerly served the Midland and Great Northern Joint Railway but closed in 1959 and has stood empty and decaying ever since. A much more recent construction is a large wind farm at Red House, built in 2006 to provide power to 6000 households. 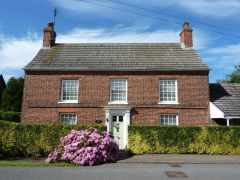 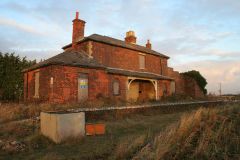 More self catering near Gedney >>

More bed and breakfasts near Gedney >>