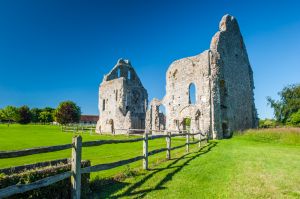 The ruins of Boxgrove Priory
An attractive little village near Chichester, most notable for the remains of Boxgrove Priory, a 12th-century abbey founded as a daughter house of Lesay Abbey in France. Though the abbey was disbanded by Henry VIII, the abbey church survives as the parish church of St Mary and St Blaise.

Within the church is the grandiose chantry chapel of the powerful De la Warr family. The chapel is strangely empty, as the De la Warr's were actually buried at Broadwater rather than here in Boxgrove.

In 1993 a fascinating discovery was made by archaeologists excavating at a gravel pit outside Boxgrove. They found the thigh bone of an early humanoid being, who was nicknamed 'Boxgrove Man'.

More self catering near Boxgrove >>

More bed and breakfasts near Boxgrove >>