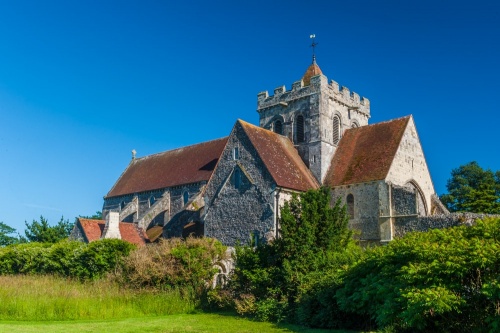 The fragmentary remains of a 12th century Benedictine Priory guesthouse stands in a field beside the parish church, which is all that remains of the priory itself. There is just something about this place that exudes a sense of peace and calm. Perhaps it is the setting; though close to the busy A27 and the conurbation of modern Chichester, the priory stands in leafy green woods, near farm fields.

Finding the Priory is not as easy as it sounds; though part of the site is in the care of English Heritage, there are no brown signs that you might expect for an English Heritage site. Instead, follow the white signs for 'Boxgrove and Priory'.

The first building you see is the ruined shell of the guesthouse. The roofless building is still impressive, standing to two storeys. In a wooded copse beside the guesthouse, half hidden by tall trees and stone walls is what remains of the priory itself. It is an intriguing building from the exterior.

At first glance, it appears to be a simple medieval parish church, but then you see the places where the priory buildings were pulled down; straggling bits of walls and columns, stray arches and buttresses meant to support a much larger building. For what remains now is only a part of the original priory, which lives on now as the parish church of Boxgrove.

There was a church here at the time of the Domesday Book, but this was destroyed to make way for the priory, established by the monks of Lessay, in Normandy. When the priory was disbanded in the Reformation, part of the priory church the church lived on as the parish church.

The interior is a mix of Norman, medieval, late Tudor, and Victorian restoration. At the west end of the nave is a labyrinth picked out in coloured stone on the floor, a spiritual tool for worshippers. After the labyrinth, the first thing you notice is the height of the nave and the wonderful Tudor painted roof.

This was installed just before the Reformation at the behest of Thomas West, 9th Lord De La Warr, whose fabulous chantry stands on the south side of the chancel. The chantry is an extraordinary piece of Tudor architecture, with some of the finest 16th century carving anywhere in Britain. The ceiling of the chantry is a quite stunning Tudor symphony of decorative vaulting and pendant bosses, embellished with Tudor symbols and the De La Warr arms.

Boxgrove Priory was selected by Simon Jenkins as one of England's Thousand Best Churches, a testament to the wonderful architecture, sculpture, interior decoration, and history of this evocative church.

More self catering near Boxgrove Priory >>