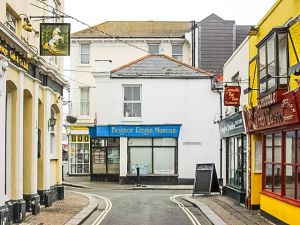 Bognor Regis Museum
This small museum tells the often-fascinating story of Bognor Regis, a popular seaside town on the south coast of West Sussex. The museum is operated by the Bognor Regis Local History Society and covers a quite astonishing range of information, from the geology and archaeology of the region to vintage photographs, cameras, toys, and a wide variety of displays covering every aspect of local life.

There are displays recreating local shops, like an ironmongers and chemists, and a collection of wireless radio communications, given to the museum by a former curator with a passion for old radios.

The museum looks at the early history of Bognor, from the time when Sir Richard Hotham established a seaside resort here. The museum boasts a scale model of Sir Richard's home, Hotham Park House.

Another scale model depicts the Esplanade Theatre, which stood just a short distance down the road from the Museum.

The Museum boasts an extensive set of local archives in the Research Room, including a wealth of old photographs and documents. The museum is generally open April to October, and on Bank Holiday Mondays, but check the website for official hours.