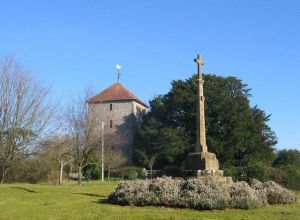 Stopham church and war memorial
Stopham is a small village on the banks of the River Rother. The village is built around a small green, where cottages stand near the early Norman church, dedicated to St. Mary the Virgin. The manor has been in the hands of the Bartlett (Barttelot) family since the time of the Domesday Book.

Memorials and brasses to the Barttelot family stand in the 11th-century church.

The ancient bridge at Stopham is of considerable interest, being named a Scheduled Ancient Monument. The current bridge is Elizabethan, built around 1580 to replace an earlier wooden bridge. The bridge stretches 248 feet, with six arches. The 16th-century structure was heightened in 1822 to allow masted boat traffic under the central arch.

More self catering near Stopham >>

More bed and breakfasts near Stopham >>