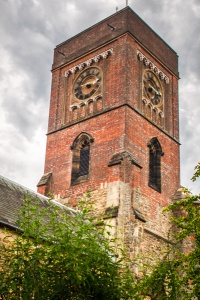 The tower of St Mary's,
Petworth

The church of St Mary stands just outside the grounds of Petworth House. There was a church recorded here in the Domesday Book of 1086, but nothing of that early building remains, and the oldest part of the church we see today is the 13th-century chancel. The north aisle and base of the tower are 14th century, with a 15th-century north chapel and several large 15th-century windows in Perpendicular Gothic style.

Perhaps the oldest part of the church is the Wyndham family's private gallery, where you can find Norman stonework against the west wall. There was probably a priest's chamber above the gallery in the medieval period. We know that there was a 'Mass Priest' at Petworth whose job was to say an early Mass for travellers and pilgrims.

Above the eastern arch of the gallery, you can still see traces of a medieval wall painting. The gallery is private property and not usually open to the public.

Against the west wall of the church is a statue of George O'Brien, 3rd Earl of Egremont The Earl was a patron of the arts and supported the work of Constable, Turner, and Romney, among others. He was also a philanthropist, and helped launch the Petworth Emigration Scheme to help local residents travel overseas to find work, and at the same time relieve rural poverty caused by overpopulation. 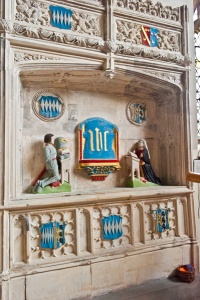 Many of the most interesting historical monuments in the church are to be found in the St Thomas Chapel. This is thought to be one of 7 chapels erected by Henry II as penance for the murder of Thomas Becket in 1170.

On the north wall of the Chapel of St Thomas is the tomb of Sir John Dawtrey (d. 1542) and his wife Jane. Dawtrey left money to repair church vestments, and also to pay for masses to be sung for himself and his wife, who predeceased him.

The elaborately carved tomb is made of Caen stone, with a mix of gothic and Renaissance carving. The central panel once bore a carving of the Annunciation, but this was defaced at the Reformation and now has the letters IHC instead. There are heraldic shields on the frieze over the canopy, at the back of the tomb recess, and on the tomb base.

The figures of Sir John and Lady Jane each kneel at their own prayer desk, rather than facing each other across a single desk as is often the case. Lady Jane's desk simply has a book on top, but Sir John's also has mailed gauntlets and a helmet to indicate his status as a knight. 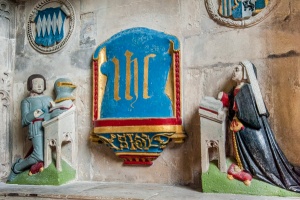 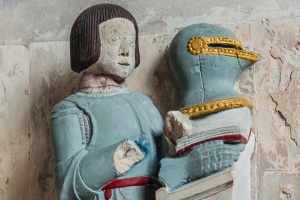 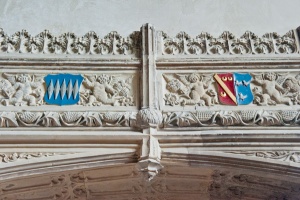 Heraldic frieze atop the tomb canopy 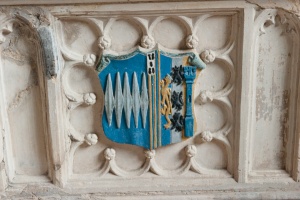 Heraldic panel on the tomb base

On the east wall of the chapel are bronze coffin plates to members of the Percy family, Earls of Northumberland, who lived at Petworth House from the mid-16th century. Many of the Percy's and their descendants are buried in a vault beneath the chapel, including the 10th and 11th Earls.

One of the most interesting of the Percy's buried at Petworth is Lucy, Countess of Carlisle. When Charles I attempted to arrest 5 members of Parliament n the lead-up to the Civil War, the arrest was foiled by Countess Lucy, who sent warning to the MPs, so that when Charles and his men broke into the House of Commons, his enemies had gone.

Also in the vault lies Henry, Earl of Ogle. The Earl was the first husband of Elizabeth Percy, the 'Percy Heiress'. When Earl Henry died at 17, Elizabeth married Thomas Thynne of Longleat. He in turn was murdered, and she married a third time, to Charles, 6th Duke of Somerset, who built the current Petworth House.

In the north eat chapel window is colourful stained glass by the CE Kempe studio (look for Kempe's trademark wheatsheaf symbol). There are small fragments of much earlier heraldic glass in the windows, including the arms of the Percy, Warren, and Roos families.

In the baptistry is a marble cenotaph to the Percy family, erected in 1837 by George, Earl of Egremont. The cenotaph was carved by John Carew, who also worked at Petworth House for the Earl.

Poor Carew never received the appreciation he felt his work deserved, and seems to have ben especially annoyed that he was never accepted as a member of the Royal academy. If you look closely at the top right of the plinth you can see an inscription in Latin which translates as 'To the shame of the Academy, not an Academician'. 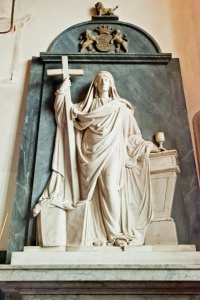 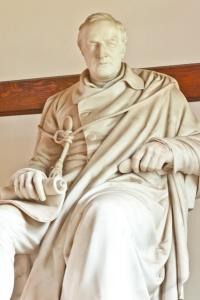 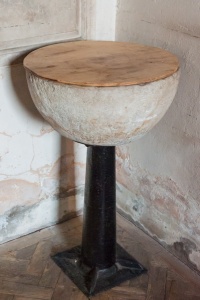 The Norman font bowl
atop a modern base 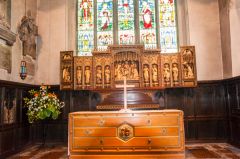 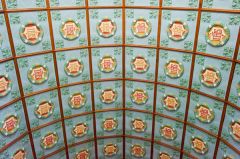 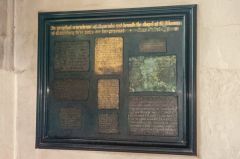 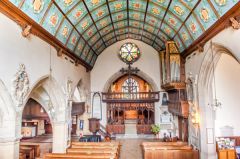 More self catering near Petworth

More bed and breakfasts near Petworth