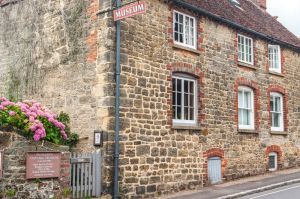 Petworth Cottage Museum
Located in the centre of the lovely village of Petworth, this small museum is a restored Leconfield Estate worker's cottage, recreated to look as it would have done around the year 1910, with a kettle on the boil and the table set for tea.

Within the house, you will see a scullery, living room, work room, attic, and cellar, and the house is surrounded by a cottage garden.

The last person to live here was Mrs Mary Cummings, who moved to Petworth from Ireland in 1877 with her husband Michael. Mr Cummings found work as a smith at Petworth House. The couple later broke up, and Mrs Cummings moved to 346 High Street around 1901 until she moved out in 1930.

The way the cottage looks today is the way Mary Cummings would have remembered it. One thing she would certainly remember is the outdoor privy, for the cottage has never had an indoor bathroom.

Within the living room is a Petworth Range, which is lit whenever the museum is open - winter and summer. It might seem odd to light the fire in summer, but it was necessary as the heat would be needed every day for heating water and cooking.

One interesting chamber is the Sewing Room. Mary Cummings was employed for a time as a seamstress at Petworth House. Here you can see a treadle sewing machine, with sewing materials laid out as they would have been for Mary's work.

The attic is furnished as a spare bedroom and in the cellar is a workshop. One unusual feature is the timber-framed wall dividing the cottage from the house next door. It is extremely unusual to see timber-framing below ground level.

One feature of the museum is a collection of Petworth Goss China. China was produced by the local Falcon Pottery from the 1880s until shortly before WWII. The concept was simple; take advantage of the popularity of seaside souvenir collecting and produce miniature copies of classical Greek and Roman vases decorated with the coat of arms of popular coastal towns.

The idea took off, and by 1900 most large seaside towns and cities had their own crested line of Goss souvenirs china products to sell as souvenirs to visitors. Petworth Parish Council had their own Goss china products created from 1894, with a crest depicting the mythical giants Gog and Magog. Some 40 pieces of Goss china depicting the Petworth crest are on display in the museum.