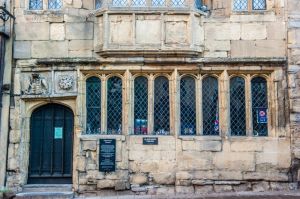 The well-preserved Glastonbury Tribunal is thought to have been a 15th-century merchant's house and a residence for one of Glastonbury Abbey's officials.

The name 'Tribunal' comes from the belief that the building once housed the abbey's tribunals, a courtroom where justice was administered for managing the abbey's vast estates. More recent historical research suggests that the building was not, in fact, used as a tribunal, but the name is so well-established that it will probably be known as the Glastonbury Tribunal as long as it stands.

The facade facing onto the High Street is typical of late medieval and Tudor houses at ground level. A projecting bay was added at first-floor level in the early years of the 16th century and you can clearly see where the addition joins to the older medieval stonework.

Over the doorway are heraldic shields carved with symbols of the Tudor rose and the arms of Abbot Beer, who died in 1524.

The ground floor has internal divisions added in the centuries following construction. One ground-floor room retains its fireplace and you can see linenfold panelling below the window opening. You can easily spot places where corbels helped support an upper floor, and where the medieval stairs stood. The rear ground-floor chamber has a panelled ceiling.

At the rear of the building is a later Elizabethan kitchen block.

The ground floor houses the local tourist information centre, while on the first floor is the Glastonbury Lake Village Museum, where you will find hundreds of artefacts from the fascinating archaeological site.

The Glastonbury Lake site was discovered in 1892 when an amateur archaeologist investigated a series of earthen mounds between Glastonbury and Godney. Excavation proved the mounds to be part of an Iron Age village built on a large artificial platform and reachable only by boat and a network of wooden tracks laid across the marshy ground.

Just a few doors down the street is another historic building of roughly the same age; the George and Pilgrim inn. 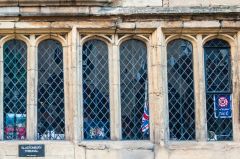 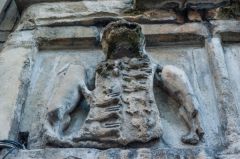 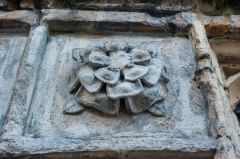 More self catering near Glastonbury Tribunal >> This charming and spacious property sits in the town of Glastonbury and can sleep nine guests across five bedrooms.
Sleeps 9