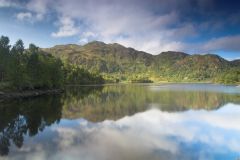 I've been a big fan of discount travel passes since the time when, as a 19 year-old, I used my Eurail Pass to criss-cross Europe, sleeping in youth hostels (or on the train), and generally expanding my horizons. It was a great experience (until I had my wallet stolen in the Amsterdam youth hostel, but that's another story).

In the UK, there are several really useful passes that really help save money if you spend any time at all travelling about. For overseas visitors to England the Great British Heritage Pass makes good sense, as do more specific discount passes like the popular London Pass and the newer York Pass. Until recently most of these passes were aimed at visitors to England, until the Homecoming Scotland Pass was announced.

Historic Scotland, The National Trust for Scotland and the Historic Houses Association for Scotland have joined together to create the pass, which offers free entry to over 135 historic properties in Scotland, among them some of the most popular visitor attractions in the country, including Edinburgh Castle, Stirling Castle, and Glamis Castle, among others. Like the other passes I mentioned, the Homecoming Scotland Pass comes in several different varieties, which mostly differ by long the pass is good for. Current pricing for the Homecoming Scotland Pass is as follows:

If you do your maths, that basically means that you can save a whole heap of money (which most of us would agree is a good thing) and in the process enjoy some of the finest historic properties in Scotland (another good thing). Passes are good for a week, and start from the first use, not from the day you purchase it.

The New Inn Hotel is an historic old coaching inn built in 1704 overlooking the River Ythan in Ellon. Among our many facilities we can offer fine dining in The Corn Kist Restaurant the relaxing … more >>