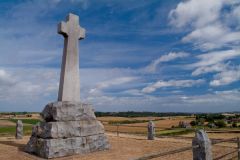 Somewhere in the world, there's a group or organization devoted to whatever you are interested in. This was brought home to me the other day when I received an email from The Battlefields Trust.

You might be aware that I devoted part of the history section of Britain Express to British Battles (if you weren't aware, here's your chance to read some interesting articles!). I thought I did a decent job of outlining the major battles fought on British soil, but that's nothing compared to what the Battlefields Trust has done.

As part of their mission, the Battlefields Trust sponsors regular guided walks around battlefields (see a brief list of upcoming events at the end of this post), and works to improve signage and interpretation panels at sites. They publish a quarterly journal called, appropriately, 'Battlefield' and hold regular conferences.

They also - and here's the nifty bit - have published a very extensive guide to British battlefields on their website. Battles are presented with background details and key facts about the conflict. Most battles come with photos of the site and access information and are listed by date, by name, and also by Local Authority/county. It's a terrific resource, and well worth looking into if you are a history buff ... like me.

Right, I promised some events, and here are several upcoming in the near future. The full list can be found on the Battlefields Trust website events page.

The Three Battles Festival
Saturday 13 June 2009
Please note that this event has been postponed to 12th September.