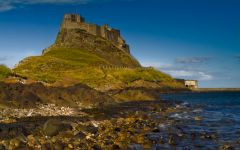 2009 marks the 500th anniversary of Henry VIII's coronation, and there are a number of special events to mark the anniversary. English Heritage is actively promoting summer events at several of their properties throughout the summer.

Among the events are:

Those are a just a few of many planned events. Full details of all the Henry VIII themed events at can be found online at the English Heritage website

In addition to the above events, there is a special exhibition at the British Library, entitled Henry VIII: Man & Monarch. The exhibition includes, among other interesting artefacts, the monarch's personal prayer book, and a love letter to Anne Boleyn. Book online or call 01937 546 546. If you subscribe to the English Heritage newsletter (I suggest it!) you will also get £2 off ticket prices.

More:
English Heritage - from Britain Express
British Library - our own article about the Library
Henry VIII

The Sun Hotel is set directly opposite the shadow of the dramatic ruins of the 12th Century castle resting within the winding loop of the River Coquet. The hotel portrays all the charm of a … more >>