Henry VII's eldest son was Arthur, Prince of Wales. He married Catherine of Aragon, but died shortly thereafter, leaving the throne to fall to his younger brother Henry. History has not proved kind to the memory of Henry VIII (1509-47).

He is often remembered as the grossly stout, overbearing tyrant of his later years. In his youth, however, Henry was everything it was thought a king should be. A natural athlete, a gifted musician and composer, Henry was erudite, religious, and a true leader among the monarchs of his day. 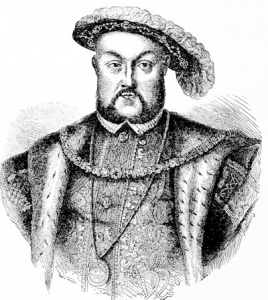 An older but no wiser Henry VIII

Cardinal Wolsey
Henry had none of his father's drive for the grind of administration. He handed over that role to his advisor, Cardinal Thomas Wolsey. This Henry was more concerned with cutting a fine figure than with balancing rows of figures like his father, and the result was predictable. Over the course of his reign, he managed to turn a bulging treasury into a gaping black-hole of debt.

Thomas Wolsey was the son of a Suffolk wool merchant. He became in turn Bishop of London, Archbishop of York, Cardinal and Lord Chancellor, and papal legate. He was even at one time considered seriously as a candidate for the papacy itself. Wolsey loved luxury and ostentation. He maintained a household of over 1000 people, and at the height of his power he was more king than Henry himself.

Religious Reformers
The whole of Europe was ablaze during Henry's time with the religious fervour of Reformation. Great reformers, religious and secular, called England home. Erasmus, scholar and monk, taught at Oxford, where he agitated for reform within the church. In his In Praise of Folly he lambasted the clergy for "observing with punctilious scrupulosity a lot of silly ceremonies and paltry traditional rules." Sir Thomas More, later Chancellor, wrote Utopia, a vision of an ideal society with no church at all to get in the way of spiritual understanding.

Henry himself, despite his later break with Rome, was not a religious reformer. He was fairly orthodox in his own beliefs, and he passed measures against Lutheranism and upheld many traditional Catholic rites from attack by reformers.

Marriage to Catherine
Henry received a special dispensation from the pope in order to marry his brother's widow, Catherine. The only child of that marriage was a daughter, Mary. Henry desperately wanted a male heir, and as time went on it became obvious that Catherine would have no more children. Henry began to cast around for a solution.

Anne Boleyn
For by now Henry had enough of his marriage, and was eyeing one of the Queen's ladies in waiting, Anne Boleyn. Anne refused Henry's advances without the benefit of a wedding, so Henry sent his chancellor, Cardinal Wolsey, to ask the pope for an annulment of his marriage to Catherine.

Unfortunately for the powerful Wolsey, he failed, and was deposed from office. Even the "gift" of his magnificent new palace at Hampton Court to Henry could not save Wolsey, who died shortly after his deposition, saving Henry the bother of a mock trial for treason. In Wolsey's place Thomas More was brought in to be Chancellor.

The Act of Supremacy
Henry's situation was now desperate, for Anne was pregnant, and at all costs, the child, which Henry was sure must be a son, had to be legitimate. Henry got Parliament to declare that his first marriage was void, and he secretly married Anne. Unfortunately for Henry, the child proved to be female once again, the future Elizabeth I. Over the next several years Henry's wrangle with the pope grew ever deeper, until in 1534 the Act of Supremacy was passed, making Henry, not the pope, head of the church in England. This was not at first a doctrinal split in any way, but a personal and political move.

Sir Thomas More opposed the divorce and was reluctantly executed by Henry. At the foot of the scaffold More is reported to have said, "I pray you, Master Lieutenant, see me safely up, and for my coming down, let me shift for myself".

How was Henry able to carry off the split from Rome? For one thing, the church had incurred a tremendous amount of bad feeling over the years. High church officials were seen as rich, indolent, and removed from the people they were supposed to be serving. The abbeys and monasteries were well off, and certainly subject to jealousy. Feelings against priests and churchmen ran high. The church had become too far removed from its spiritual roots and purpose.

Related:
Back: Henry VII
Next: The Dissolution of the Monasteries