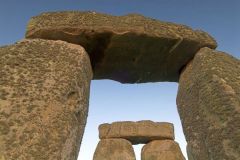 Here's an announcement of a new discovery that almost snuck by me unnoticed; archaeologists working on a site on the banks of the River Avon a mile from Stonehenge have discovered evidence of a 'lost' stone circle which stood at the end of a ceremonial avenue between the river and Stonehenge itself. The new circle has been dubbed Bluestonehenge.

You might wonder how a stone circle can be 'lost'. It appears that sometime after the circle was erected, the stones were removed and taken away from the site, leaving only the holes in which they stood. Evidence of 9 holes has been found, and scientists estimate that the original stone circle contained up to 25 stones. The stones are thought to be bluestones, from the Preseli Mountains of Wales, the same site that supplied the famous bluestones at Stonehenge.

Bluestonehenge is 33 feet in diameter, and was enclosed within a henge, or bank and ditch. The circle was joined to Stonehenge by a processional avenue, or trackway, constructed in the late Neolithic period. The stones were probably erected between 2800 and 3000 BCE, but the henge was not added until about 2500 BCE. The builders of Bluestonehenge used deer antlers as pickaxes to dig the holes for the stones.

The significance of the discovery seems clear; Stonehenge was not an isolated site, but rather, it formed part of a huge ceremonial landscape that was linked closely to water, and the river. The exact sequence of events at Bluestonehenge still needs further study; radio-carbon dating of material found in the holes, and the deer antlers used for tools, should provide an idea of what happened to the bluestones, and when.

Bluestonehenge was excavated by an international team of archaeologists headed by scientists from Sheffield University under the directorship of Professor Mike Parker Pearson.

<< Scotland from Above - Young Archaeologists Club >>

The Talbot Hotel is a traditional 16th century coaching inn and has been recently refurbished to modern standards throughout. It has a contemporary bar and restaurant which offer a delightful traditional menu and a fine …