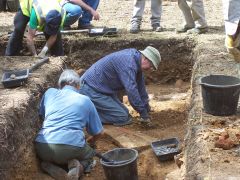 Here's a heads up on the approach of one of my favourite heritage oriented events - the annual Festival of British Archaeology. You may know the Festival under its old name, National Archaeology Week. The Festival is a nationwide event which encourages people to get involved in archaeology through the specially organised event. Its been going on since 1990, which makes this year's event the 20th-anniversary festival.

The Festival is coordinated by the Council for British Archaeology but is entirely reliant on the participation and support of groups, societies and organisations around the UK.  Events held during this special fortnight present an excellent opportunity for organisations and societies involved with archaeology and heritage to engage with their local communities and help everyone to engage with archaeology and the historic environment around them.

This archaeological extravaganza has been a great success each year, and in 2009 the newly expanded fortnight-long event had over 650 events organised by museums, heritage sites and organisations, archaeology and history societies, universities, local councils and countryside agencies all over the UK. 2010’s event promises to be the biggest UK-wide celebration of archaeology yet and the Festival will be celebrating its 20th anniversary.

Among the many, many events on offer are a weekend exploring the medieval history of historic Harewood House in Yorkshire, a chance to excavate a test pit looking for medieval artefacts in the village of East Harptree, Somerset, and an open day at the Hyndford Water Mills excavation site in Lanarkshire. There's lots more on offer, and you're sure to find something that will interest you.

Photo of Cedars Park is © the Enfield Archaeological Society.