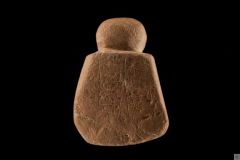 The Venus, otherwise known as the Westray Wife, is a small carved figure, discovered last year by archaeologists working on the Historic Scotland excavation at the Links of Noltland, on Westray. The unique carving is the only known Neolithic likeness of a human form to have been found in Scotland.

The carving measures 41mm by 31mm. It is carved from sandstone and shows a woman’s face and body. While it may seem odd to associate the name of the Roman goddess Venus with a Neolithic carving, its name actually comes from its resemblance to similar figurines classed as Venuses from elsewhere in Europe.

The Orkney Venus is currently on display in a special exhibition created by Historic Scotland at the Westray Heritage Centre. The exhibition has attracted more than 100,000 visitors during an ongoing tour of Edinburgh Castle, Stirling Castle, Kilmartin House in Argyll and Urquhart Castle on the banks of Loch Ness.  The tour will end later on this year at the Orkney Museum in Kirkwall.

Peter Yeoman, Historic Scotland’s Head of Cultural Resources said, “The Orkney Venus is the first replica of the human form to be found in Scotland and is possibly the best and earliest to be found in the UK. Her discovery confirms the importance of the Links of Noltland as one of the most fascinating prehistoric sites in Scotland.  It’s an incredibly rich settlement site which is advancing our understanding of our Neolithic to the Bronze Age ancestors.

“The people of Westray are giving us tremendous support and we’re working closely with the local school as well as with the heritage trust. Mr Brown the island baker has even created Westray Wife shortbread.”

The Orkney Venus is in the news today as it has made the top three for the Best Archaeological Discovery category in the 2010 British Archaeological Awards.  The winner will be announced at the awards ceremony at the British Museum on Monday 19th July 2010.

Note: photo of the Orkney Venus is © Historic Scotland

Resources:
For details of the Noltland dig and blog go to http://www.westrayheritage.co.uk/. The dig is open to visitors on weekdays until September.
Orkney Travel Guide - our look at the wonderful Orkney islands