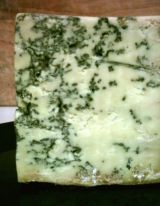 Here's one for the books; according to research by Richard Landy, Stilton cheese actually originated in Stilton, Huntingdonshire (modern Cambridgeshire). For centuries it has been thought that the distinctive blue cheese we know as Stilton was first made in Melton Mowbray, Leicestershire, and became known as 'Silton' only after it was sold in the town. Landy found a letter written in 1723 that suggests that the cheese was first made by the landlord of the Bell Inn.

An aged hard cream cheese was first produced in Stilton as early as the late 17th century, and was certainly being made regularly by the early 18th century. By 1724 Daniel Defoe was able to comment in his Tour through the villages of England & Wales that Stilton was famous for its cheese.

The popularity of this local cheese was guaranteed when Stilton became a coaching waystation on the route between London and Edinburgh. The landlord of the Bell In, one Cooper Thornhill, could not supply his customers without outside help, so Stilton then became a centre for distributing the cheese, rather than producing it.

The law
So entrenched is the attitude towards what constitutes real Stilton cheese that it is actually against the law to make cheese in Stilton using a traditional recipe and call it Stilton cheese!

Today, a cheese rolling contest is still part of the annual Stilton May Day celebration.