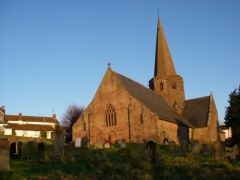 Thousands of people visit the Marches village of Grosmont each year to visit the romantic ruin of medieval Grosmont Castle. Most leave without sparing a glance at another of Grosmont's historic treasures, the parish church of St Nicholas. Research released recently by the RCAHMW (Royal Commission on the Ancient and Historical Monuments of Wales) suggests that this attractive 13th-century building has the oldest roof of any church in Wales, and certainly the best-preserved pre-1400 roof.

St Nicholas is a large cruciform building with a central tower topped by a striking steeple. At first glance the building may appear Victorian; the result of extensive rebuilding in the 19th century. Inside, however, is a spacious medieval structure, with a long aisled nave relatively untouched by the sometimes heavy hand of Victorian restorers.

The most intriguing feature of the building is the timber roof, built of posts rising from tie-beam to lap-jointed collar and from collar to ridge; the roof trusses are braced to a collar-purlin to prevent racking. This type of roof is relatively rare in Wales, and difficult to date with any precision.

Tree-ring samples taken from the roof timbers revealed that the timbers were cut sometime between 1214-1244, very probably during the lordship[ of Hubert de Burgh, who in 1227 was granted a license by Henry III to cut 50 oaks from the forest at Trevill to use for his buildings at Grosmont. Though most of Hugh's timber must have gone to build the castle, it seems likely that some at least, were used for the church roof.

NB. photo is © Alan Bowring, licensed for reuse under a Creative Commons Licence