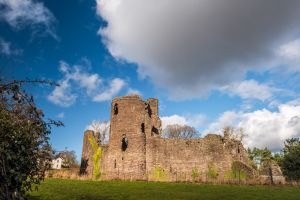 Grosmont is one of three castles built to guard to main route between Hereford and south Wales - the others being Skenfrith and White Castle. The castle is protected by a wide moat, 20 metres across, and a system of ditches and banks. The initial castle was of timber, but during the 13th century it was rebuilt in local red sandstone by Hubert de Burgh. It is this reddish colour that helps make your first view of Grosmont so striking.

The stone structures were enclosed by a high curtain wall, with three stone towers and an impressive gatehouse. The design is similar to the castle at Cilgerran, near Cardigan.

The first castle at Grosmont was erected before 1100 to impose Norman rule on the territory they had wrested from the Welsh in northern Gwent. The timber fortress was defended by earthwork banks and a huge ditch. The ditch still survives.

In 1201 all three castles were granted to Hubert de Burgh, a man on the rise in court circles. De Burgh was one of the most powerful Marcher Lords; Normans who effectively ruled their own territory along the Welsh border. He would eventually become the royal justiciar, the early medieval equivalent of a Prime Minister. 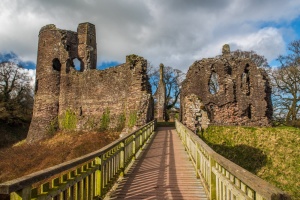 Crossing the bridge to Grosmont Castle

At Grosmont de Burgh demolished the timber defences and rebuilt the castle in stone. His first creation was a rectangular hall block, finished in 1204. The hall block had storage areas on the ground floor, linked by stairs to a great hall and lord's chamber on the first floor. The upper floor is long gone, and the hall block stands roofless.

By 1230 the castle had gained a high curtain wall and three circular towers to provide both defence and accommodation.

In the 14th century the Earls of Lancaster enlarged the gatehouse, accessed by a drawbridge. They also built the chamber block, with the distinctive Gothic chimney which is one of Grosmont's most striking features.

Henry III came to Grosmont in 1233 to quell a Welsh rebellion. Henry V (before he was crowned king) made use of the castle when stamping out the Glyndwr rebellion in 1405. But Grosmont fell into disuse, and a records of 1538 note that it was abandoned and in decay. It was taken into state care in 1923 and is now administered by Cadw, Welsh Heritage.

Access to the castle is via a wooden bridge - the 14th century drawbridge no longer remains - over the empty moat. A ruined gatehouse and curtain wall partially survive along with the remains of a two-storey rectangular hall block and a Gothic chimney pot. You can climb a set of stairs to the top of the curtain wall where a parapet walk leads between two of the towers and gives a wonderful view.

The castle is signposted entering the village but the actual entrance is not obvious. There is no dedicated parking area so you will have to find a spot along the village streets. Opposite the village shop a footpath leads past some houses to the castle. It is easy to miss the path; I walked past it several times before I noticed the unobtrusive sign.

The castle itself is an open site, accessible at any time, and there are several useful information panels with artist's impressions showing how the castle was built and how it looked at various points in its history. Grosmont is a relatively small castle, but the striking red stone and the wide moat make it a very satisfying one to visit.

I also highly recommend a visit to the nearby church of St Nicholas, just across the main village street from the castle footpath. 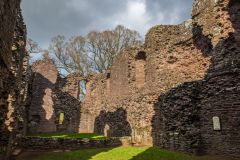 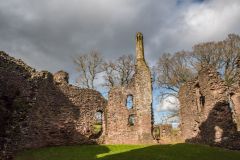 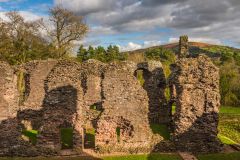 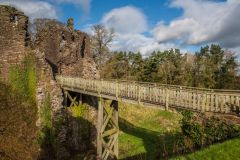 More self catering near Grosmont Castle >> 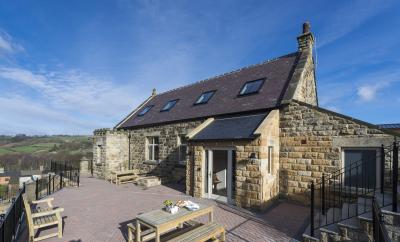 A fabulous former village school converted to provide luxury three bedroom accommodation in this charming village with stunning long-distance views and offering a suite for those with mobility issues.
Sleeps 5 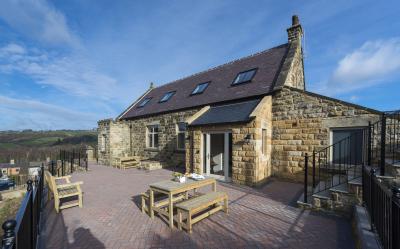