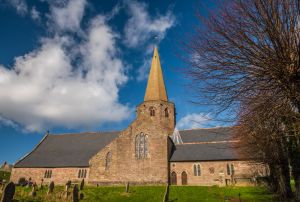 This historic church stands almost opposite the imposing ruin of Grosmont Castle. It is a large church built at roughly the same time as the castle, and it retains much of its 13th century character. St Nicholas is built on a cruciform plan with an impressive central tower and spire. Though much of the church was rebuilt in the Victorian period, the aisled nave is relatively intact, with an spacious medieval interior.

The real treasure of Grosmont church is the tie-beam and king-strut roof, which current tests have revealed to be possibly the oldest existing church roof in Wales. A tree-ring study dates the roof to the period 1214-1244, suggesting that it was built during the time when Hubert de Burgh was lord of Grosmont (1219-32). This would make it the earliest scientifically dated roof in Wales, and the only known church roof in the country from before 1400.

The church itself was probably begun around AD 1190, as evidenced by the rounded arches of the crossing. The nave is a product of the early 13th century and the chancel is slightly later. The tower and its striking spire were added in the late 13th or early 14th century, and the final piece was the north porch, built in the mid-14th century. 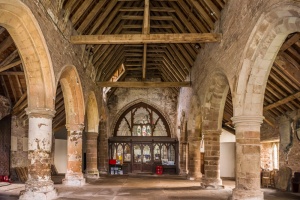 Set onto the west wall of the south transept is a beautifully carved stone slab, once part of the memorial to Charles William, a 17th century Mayor of Grosmont, and his wife Joan Baker. William served as the Deputy Steward of the Duchy of Lancaster in the early years of the 17th century. His wife Joan was the daughter of William Baker, steward to the lord of Abergavenny.

The couple had no children, so when William died in 1636 the estate passed to Henry Gabb, whose name is also carved on the memorial slab, with the date 1708.

Set into a niche in the south wall of the south transept is a fascinating relic, a section of what appears to be a 14th century wayside cross, with worn figures depicting Mary holding the infant Jesus on one side and a Crucifixion scene on the other.

The font is 12th century, with an octagonal bowl decorated with cable moulding. In the south wall of the chancel is a beautifully carved 14th century double piscina. Beside it is a triple sedilia in the same style, but this is a Victorian copy of the medieval original. The stone pulpit and most of the other chancel furnishings are part of a 19th century restoration by architect JP Seddon. 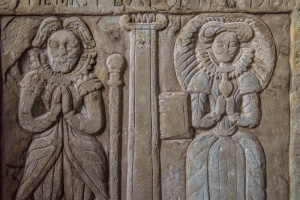 Perhaps the most peculiar historic treasure at Grosmont is the gargantuan effigy of a 13th century knight set on the floor at the south west corner of the nave. The size of the effigy is quite amazing; if it was life sized then the knight must have stood over 8 feet tall and been as broad at the shoulders as two men put together. There is no indication of who the effigy represents, but even so it is a remarkable piece of historic art on a massive scale.

Entering St Nicholas is a bit of a shock. The church is really a building of two halves. The nave, with its massive Romanesque pillars and rounded arches, is devoid of furnishings, and stands empty, with old gravestones propped against the walls and bits of medieval carving piled on a window ledge. A modern screen separates the nave from the comfortably furnished chancel and transepts. There are a few information sheets about the church, though these are rather haphazard and do not describe all the historic features. And believe me, there are lot of historic features to explore!

I was amazed at the huge effigy of a knight in the nave and can only wish there was a good information sheet explaining its origins. The William memorial is a treasure; it is beautifully carved and very nicely restored, so you can easily make out the details of the couple's costumes. St Nicholas' church is a delight to visit. 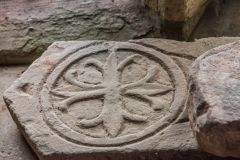 This mid-terrace cottage is situated in the village of Grosmont, near Whitby, and can sleep six people in three bedrooms.
Sleeps 6 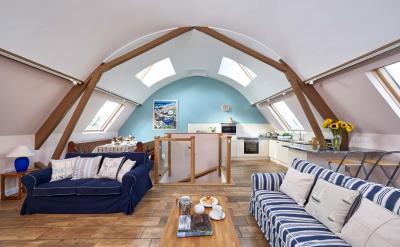